Chemotherapy After Surgery For Bowel Cancer

PrevPreviousChoosing The Right College After School
NextWhat Is The Correct Hill Walking Etiquette?Next 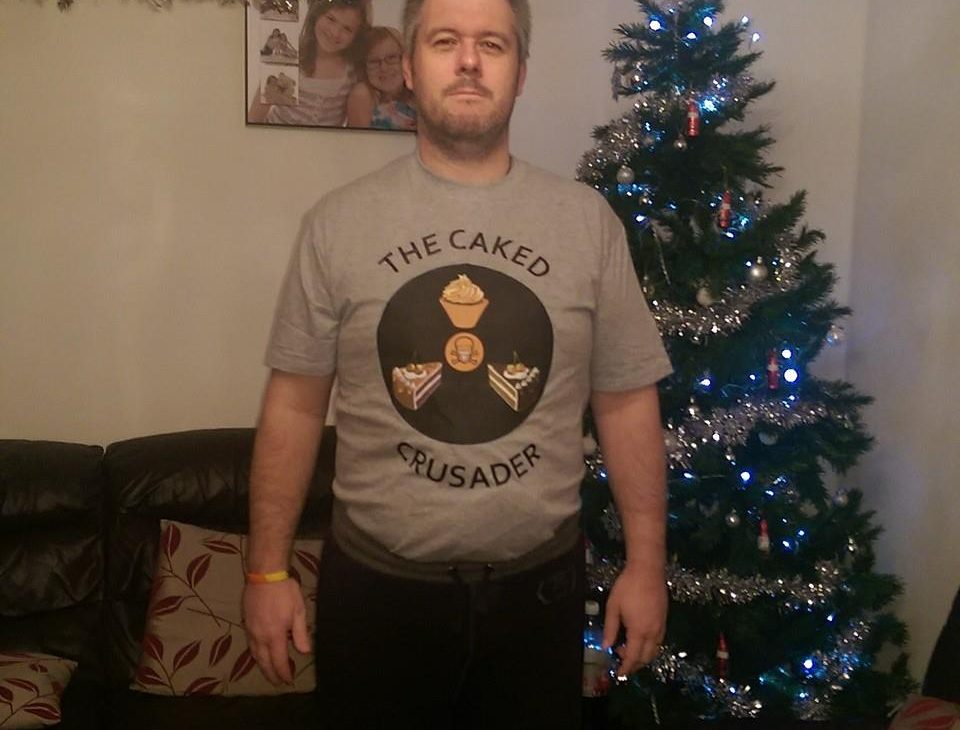 Over time, I’ve faced the same dilemma with my Facebook posts.

When all this started happening, I decided to share everything on Facebook. This was mainly to keep everyone up to date, thus avoiding the need for repeated, ‘How are you getting on?’ conversations. It developed into much more than that; my Facebook friends have turned into a significant part of my support network, for which I am eternally grateful.

But the ‘eternally’ aspect is the problem. I started posting on Facebook more than 4 years ago. And I’m still doing it now. It’s getting awkward… People can only be supportive for so long! It’s getting to the stage where I feel guilty for not dying yet, and giving everyone closure.

Which is why I’d decided not to make Facebook posts about my chemotherapy after surgery for bowel cancer. After all, been there; done that. But then this happened:

The teeshirt was a collaboration of: my wife, Julie; a friend of the family, Liz, and; my sister in law, Ruth. They called it my super-hero costume… on the basis of a post I’d made in May:

If you cut me, do I not bleed!?
Except now, when you cut me, my blood, like everything else that leaves my body, is poison and will dissolve you where you stand.
This disease has not struck me down; it has made me more powerful than you can possibly imagine!

But, after that, I largely steered away from writing more about chemotherapy on Facebook. And I was toying with doing likewise, here.

But then I went to the cinema last night and watched The First Purge, which is, in effect; The Purge 4 (a pretty good film, for what it is). Also on at the cinema was:

It was at this point that I realised: people love sequels!

And so, here we are; Chemotherapy After Surgery For Bowel Cancer.  This time with:

So, following my diagnosis, I’d had four sessions of chemotherapy over a period of three months. This ran from 13th May to 31st July 2014, and produced minimal debulking of the tumours.

After that, I’d had surgery:

My second chemotherapy treatment would, again, be four sessions, over a three month period, and it started on 1st December 2014. The principle was, once again, an intravenous session of Oxaliplatin, followed by two weeks of Capecitabine tablets. Then a week off to recover. Rinse and repeat three more times.

The sharp eyed among you will have already spotted a somewhat festive problem, in terms of the timings. My second session was on 22nd December 2014. Medicine doesn’t care about holidays. It works best when it is delivered at the proper intervals. This meant that, three days before Christmas, I received an armful of poison. And on Christmas day, itself, I had tablets galore. Admittedly, there was also turkey. But after such a sumptuous appetizer, who has room for turkey?!

Fortunately, Christmas wasn’t at our house that year, it was at my sister in law, Sue’s house. I actually managed to make an appearance but didn’t stay long. Thinking back, I’m not sure if going was a good idea. Me sitting there picking at my turkey, looking awful, must have dampened the mood for everyone else. That said, if I hadn’t been there, them worrying about me being stuck at home would have also been something of a mood dampener… Ah, well; chemo! What’re you going to do?!

I think the main difference with chemotherapy after surgery for bowel cancer is that you’re starting from a lower point. This means that the chemo side effects kick in almost immediately.

This was certainly the case with the chemo brain. I was still feeling stupid from the from the first series of chemo. The second series took me back down to the darkness almost immediately, and then dragged me to new depths before the end.

The nausea also got very bad, very quickly. And, apart from the occasional, brief, foray for Christmas meals, I became increasingly bedridden. I hadn’t been particularly active in and around the surgeries I’d had, what with all the exciting complications that went with them.

As such, I was already pretty pale and flabby, when chemotherapy after surgery for bowel cancer sent me back to my bed. Even by my standards! And, again, the all pervading feeling of nausea meant I was eating little but often. Usually only bread and cheese. But, with the utter lack of exercise, these calories soon added up into extra weight.

It should’ve been no surprise, then, when, on 31st December, just six days after eating Sue’s turkey, I found myself struggling to breathe. It got so bad that I called the hospital, and they kindly invited me to spend New Year’s Eve at the Medical Assessment Unit. They even let me stay the night…

The following day, I found out that I had bilateral pulmonary emboli (PE). Which is to say a pulmonary embolism… in both lungs! A couple of days before, as I was walking up the stairs, I’d felt something give in my calf. At the time I thought I might’ve pulled a muscle. But, by the time I got to the top of the stairs, there was no pain, so I thought nothing more of it.

Until I was introduced to the term Deep Vein Thrombosis (DVT) in the hospital. That was what had given way in my leg; a blood clot. It had then broken up and hit both of my lungs. It was explained to me that this was a good thing. By getting filtered out in the lungs, these clots could not then go to the heart, and cause a heart attack (MI). Or to the brain, and cause a stroke (IS).

If you’re going to have a DVT, a PE is certainly a better option than a MI or an IS…

So, maybe it was nothing to do with Sue’s turkey, after all. But still; six days! Coincidence? I guess we’ll never know for sure.

The upshot of the experience was that I’d need to take a new medication, for the foreseeable future. The medicine in question was Clexane, which is a blood thinner, and had to be injected into the fat around the belly. It couldn’t be an oral form of blood thinner, like Warfarin, because this was contraindicated for chemotherapy.

It was important, I was told, to spread the injections around the area of belly fat as much as possible, because the injections could be quite sore and cause bruising. Fortunately, I had a lot of belly fat. Unfortunately, half of it was out of bounds, because I also had a colostomy bag and a stoma. Access to other areas, too, was limited due to the surgical scars; I wasn’t allowed to inject too close to those. This lead to a rather colourful result:

I had to deal with the Clexane injections until March, when I was switched to the oral medication Rivaroxaban. The colostomy bag I had for considerably longer.

I’ve discussed colostomy bags at some length in previous posts, so I’ll only touch on them here.

In terms of chemotherapy after surgery for bowel cancer, the presence of colostomy bags does add another dimension. For a start, the IV sessions at the hospital can run for a good couple of hours, plenty of time to need to change your bag. In practice, this never happened. I found that the chemo led to almost instant constipation, meaning changing a colostomy bag at the hospital was never needed.

To, to be fair, it wouldn’t have been a problem if I had had to change it. It’s a hospital! The toilets are designed to take patients in a wheelchair, plenty of room to make a bag change. The only real problem would have been the IV line. But the IV stand is mobile and the pump also has battery power. It would have been no problem keeping the line out of the way. Nothing, in fact, to worry about.

Having constipation and a colostomy bag, however, took some getting used to. I think this is best summed up by the Facebook post I made on 7th February:

It’s been a while since I wrote anything disgusting about my treatment, so, in celebration of my last round of chemo…
The IV chemotherapy I receive makes me constipated for a few days. No problem under normal circumstances but when you’ve had a colostomy; let’s just say that you end up with bags that are effectively full of gravel.
Now you go and enjoy your day.

In a way, though, I think it was easier than the standard way. You certainly knew where you were. And it wasn’t so much the actual constipation, it was the overcompensation that came afterwards. Post chemotherapy after surgery for bowel cancer, or otherwise, it seems that the bowel habit goes from one extreme to the other, very quickly.

With a colostomy bag, you really had to watch for that. You certainly couldn’t afford to be out and about. Sometimes bags can fill very quickly. But, just because a bag is full, this doesn’t mean that your body is finished. At times like these, the best thing to do is lie on the toilet while nature runs its course. Nothing says class, elegance and dignity like this aspect of having a colostomy bag and chemotherapy at the same time.

My last IV session at the hospital was on 5th February and my last day of chemotherapy after surgery for bowel cancer was on 19th February 2014.

I emerged from the chemotherapy in a situation that can best be described as: unhealthy.

I was extremely unfit and had lost a lot of muscle mass. Despite this, I’d actually managed to gain weight, which would have put my percentage body fat at a frightening level. The cumulative experience of this chemo series may well best be explained thus:

At the end of my chemotherapy after surgery for bowel cancer, there were still some matches left in the hockey season. So, naturally, I played those. Only because my team captain and teammates are awesome, and let me. I think, not being in danger of relegation also helped. But the first time I went to receive a ball, my brain said ‘run’ but my legs just laughed. I ended up rolling into a crumpled heap on the astroturf.

The really important thing about being on chemotherapy is keeping yourself active. To avoid weight gain. And loss of fitness. And, certainly, to avoid DVTs and PEs. But, to do this, you need an effective anti-nausea regime. I promised myself that, if I ever went back on chemo, I’d make sure I wasn’t bedridden by nausea again.

That plan failed so hard, it’s staggering. But that’s some time off, yet.

What happened next, after I finished my chemotherapy after surgery for bowel cancer, was that I was scanned and told I was cancer free. That, and the consequences thereof, I shall consider shortly.

But that scan and that meeting, sort of, mark the end of this first phase of my experience with cancer. I say, ‘sort of’, because there’s also the stoma reversal surgery to consider in this phase. But, before I get to that ending, there are a few, general, aspects of cancer treatment, particularly my cancer treatment, that I need to cover first. And that will take the next few weeks…

PrevPreviousChoosing The Right College After School
NextWhat Is The Correct Hill Walking Etiquette?Next