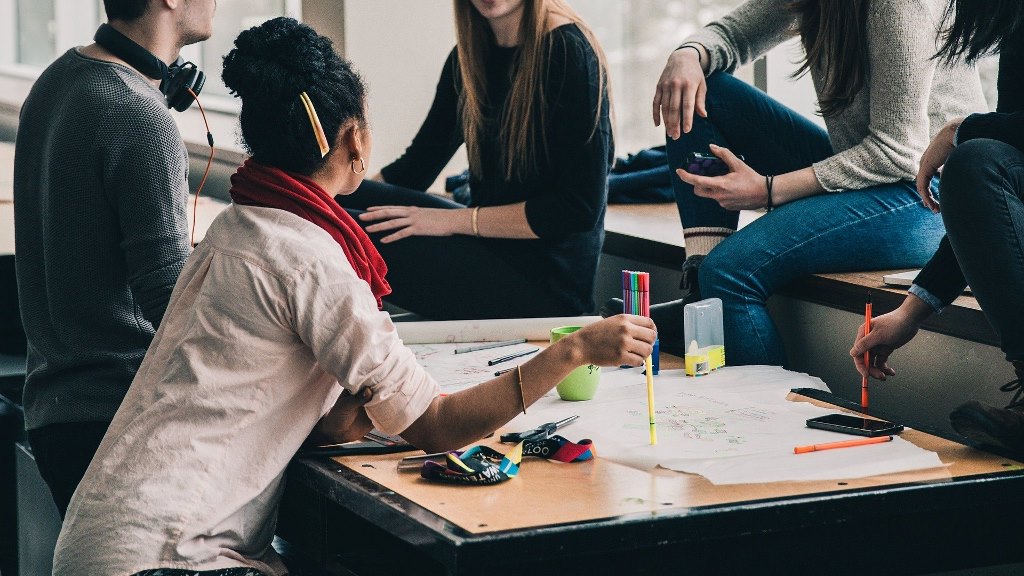 At the end of September 2020, my older daughter, Emma, left for university. At that time, there was a feeling of optimism around the country, that we were collectively on top of the Coronavirus Pandemic. As such, moving into student accommodation on campus seemed the natural thing to do. But, as anyone who has been to university will tell you, even before you get to your accommodation, you’re starting to think about who you’re going to live with the following year. Because choosing next year’s housemates is a big deal.

To start with, what if you can’t find anyone to live with? What if there’s no one you like? Worse, what if no one likes you…?!

I’m not saying that these concerns dominate anyone’s mind. Nor, in reality, are these concerns with any merit. The reality is, though, for most of the teenagers starting at university, this is the first time they’ve lived away from home. They’re in a vulnerable situation. And, of course they’ll find someone to live with next year. Every student knows that, deep down. It’s just a relief when it happens.

Providing you ended up choosing the right housemates…

Because choosing the wrong housemates may be worse than not being able to find anyone to live with at all. Having to live with a person, or people, you end up not getting on with, can really ruin your university experience. Not just the social aspect, but the academic side, too. The constant stress of living with someone you don’t like can impact on your studies.

Which is why it’s so important to meet and interact with as many other students as you can. Not just the people in your halls of residence, and the people on your course. But people in the clubs, teams and societies you join. Which is, of course, the whole point of joining said clubs, teams and societies. To introduce you to other students with whom you share a common interest…

People who you might want as housemates in the coming year.

It’s also why you want to take your time before choosing your housemates for the following year. Really get to know them a bit. Spend time with them in a variety of settings, outside of where you met them. What I’m basically saying, here, is find out what they’re like when they’re drunk. Trust me when I say, it’s worth knowing…

Unfortunately, none of that was available to Emma.

None of the clubs, teams and societies were running. There was very little in-person teaching, meaning she barely interacted with her classmates. And, for most of the semester, clubs, bars and venues were shut. Being a first-year student during a global pandemic turns out to be quite a restrictive experience.

The upshot of which means that, for an awful lot of students, their only regular companions are the housemates they moved in with at the start of the year. Typically, people that they’d never met before. And, while some of these housemates might be on the same course, there are no guarantees.

Living with a classmate can be very helpful, because it means that you can study together. You get to share knowledge and understanding and, potentially, increase the grades of all concerned. Additionally, in subsequent years when you’re living off-campus, you can travel to lectures together. In Emma’s case none of her housemates are on her course. Which is also true for a number of her other housemates. Some, however, got lucky and found classmates within the house.

And Emma’s first year accommodation is, indeed, a house. The house accommodates 13 students: five each on the second and third floors, and; three on the ground floor. Also on the ground floor is the kitchen/communal area. Meanwhile, the second and third floors each have a shower and a separate toilet. The bedrooms are small, but intelligently designed to maximise storage space, and feature a sink.

13 strangers chucked together into a three-storey house, with not enough toilets or showers, and a kitchen stove that only has four burners… Luxury, it is not.

It is, however, perfectly sufficient.

And, best of all, everyone in her house gets on well with each other. Something that was a relief to Emma, but also to me. One of my biggest concerns for Emma, was that she’d struggle with some of her housemates. This is something I barely touched upon in my post, When Your Child Leaves for University, because in truth, as a parent, there’s very little you can do to help. And there’s nothing you can do to mitigate against it… It’s worrying!

But everyone did get on. Which led to something unexpected happening…

Because Emma and her housemates knew that they’d all be choosing next year’s housemates from within their number, the process started almost immediately. People were starting to buddy up before the end of October… That’s less than a month after they’d met for the first time! To be choosing housemates for the entire following year, within just a few weeks of meeting them, seems a risky proposition to me.

After all, when I did all this, in the late 80s, we didn’t even start talking about choosing housemates until well after Christmas. And we didn’t actually start the process of looking for somewhere to live until Spring. At the earliest!

On reflection, we were probably a bit slow off the mark…

But Emma and her housemates certainly haven’t been!

Emma and her housemates decided that, since they all got on, they might as well just sort themselves into two groups for the following year. This process did come with a bit of compromise, for a couple of people. Maybe even a bit of disappointment, for one or two. But dividing 13 people in half, is always going to be tricky. Particularly because there were a couple of self-imposed conditions to be met:

The idea was to recreate the happy vibe they currently enjoyed, in both of the smaller households of the following year. And, the odd compromise aside, they managed to work it out. Well done to all concerned, I say.

The next step was deciding when to start house hunting. The conventional wisdom said that January 2021 was the best time. The university had links with lots of rental agencies, and the details of these were released on 25th January. So, it was decided then: go home for Christmas and then start house-hunting in the New Year.

Someone innocently suggested that they might as well look at a couple of houses now. Just to get an idea of what was on the market…!

And I’m sure you all know where this is going.

Yep, the house hunting, proper, was fully under way in the beginning of December. Not that doing so, during the coronavirus restrictions, was that easy. These restrictions meant that only one person could visit a potential house. On the flip side, most of the houses offered a virtual tour, presumably made by the previous occupants.

Mind you, there were plenty of good reasons to start house hunting so early:

All of which is why, before the end of December, Emma and her housemates had signed the lease for the house they’d be living in during their second year at university.

Incredibly, even at this speed, Emma was the last of her college friends to get their houses sorted. Friends who were now attending other universities, as follows:

So, the coronavirus pandemic has definitely had an impact on how students are choosing their housemates for the following year. As well as when they’re choosing these housemates.

For her part, Emma is happy that all this housemate choosing malarkey is done and dusted. I’m just impressed with what they’ve achieved.

To secure their house, each of the six housemates had to pay a deposit of £594. Additionally, they all had to pay the first month’s rent of £515. That’s a lot of money to find, in December, for a rental period that doesn’t actually start until 14th September of the following year. Fortunately, Emma has the funds in place to deal with all this… Despite the fact that the rental period is for a full calendar year, meaning that she’ll have to pay until 13th September 2022.

Even though her academic year will end in May 2022…

So, 12 payments of £515 comes to a total rent for the year of, £6,180. This does not include any taxes or bills. Additionally, the house does not come with any car parking spaces. Not that any of them currently have cars, but it could still be a potential extra cost in the future. For example, if parking on the street requires a permit.

To my mind, the best way to offset that three months of dead rent, is to stay there for the following(s) year as well. At least that way, you get to leave a bunch of your stuff in the house over the summer. It might even mean that Emma can travel home by train at the end of her year. And back to Uni, for the beginning of the next. After all, she wouldn’t have that much to carry…

Let’s see how that plan pans out, shall we…!

Emma has discussed this multiple-years option with her housemates, and it is being considered. The difficulty is that at least one, and maybe two, of her housemates have a placement year in their third year. Meaning that, whoever is left will have to find people to fill the spare rooms. Because the full rent will still be due, no matter how few are in the house.

Which brings us back to the costs that I might face…

Ah well, it shouldn’t come to that.

It is worth keeping in mind, though, if you’re a parent who’s child is heading off to university soon. Because it’s certainly a liability that I wasn’t expecting to have to accept.

Anyway, back to Emma’s house for next year.

The house has two single bedrooms and four doubles. One of each of these is on the ground floor. There’s a double on the middle floor, which is where the kitchen/communal area is situated. The top floor has the remaining three bedrooms.

All of which raises to two quandaries:

Well, the first issue was discussed in advance. There had been some talk of making proportional payments, depending on room size…

It might not come as any surprise when I tell you that some of these people are studying maths!

As it turned out, though, the singles in this house were sufficiently big that differential payment became a non-issue.

In order to get around the second problem, all the housemates drew up their top three choices of bedroom. By a happy convenience, five of the six were able to get their first choice. One person was stuck with their third choice, but everyone seemed happy in the end. Definitely a good start for a harmonious year together.

Of course, my two experiences of ‘girls not liking ground-floor bedrooms’, could simply be a coincidence. It’s certainly not enough to form a conclusion or generalisation. That said, if you’re the parent of a son who is considering going into a mixed gender house… And your son really doesn’t want to end up in a ground floor bedroom… It might be worth him ensuring his household decides the room allocation before the contract is signed…. Just in case!

But I’m digressing, when I should be wrapping up…

Choosing the right housemates for the following year, is an important step to achieving a happy year at university. I’m really thrilled for Emma that she’s managed to overcome the difficulties presented by SARS-CoV-2, and get all this sorted out so early.

All I need to do now is get an extra key cut, without Emma noticing, so I can appear in her kitchen at unexpected moments. Ideally with a hidden camera to capture her reaction.

Ahhhh, next year is going to be GREAT!