Do Men Really Only See in 16 Colours?! 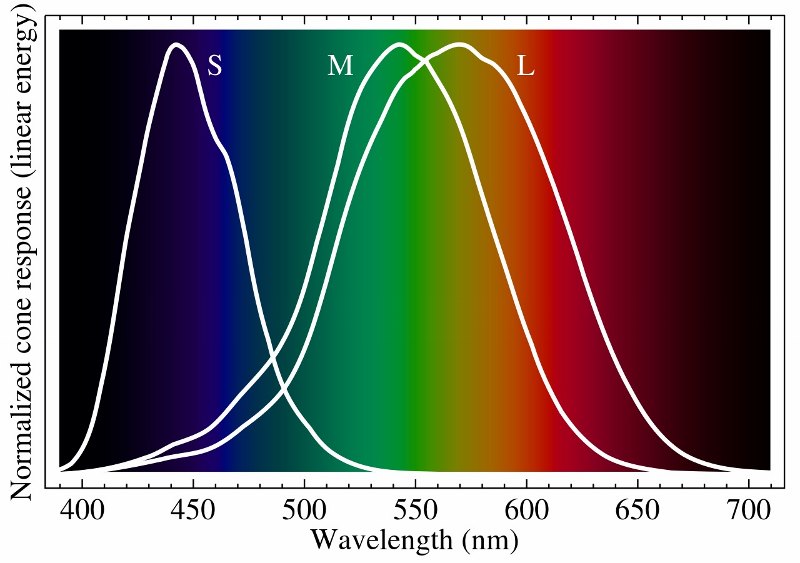 Many years ago, I saw something that suggested that men only saw in the Microsoft Windows default 16-color palette. More recently, there’s been the “Men’s Rules for Life… For Women” list, doing the rounds on social media. One of these rules reiterates that men only see 16 colours, by pointing out that ‘peach’ is a fruit, not a colour. As is ‘pumpkin’…

So, anyway, I’ve been overthinking this, as I do, and I realised that men can’t actually see in 16 colours. Because I couldn’t name 16 actual, real colours! What I got was this:

Now, I know that I’ve left indigo out of the list of rainbow colours, and you know why? Indigo can do one! It’s just a darker purple, and one purple is enough. Besides, take a look at the rainbow, below, and ask yourself, “Is indigo really there?”:

So that’s where I get stumped. 11 colours, of which two aren’t actual colours…

Which makes you wonder what all this tripe about ’16 colours’ was, in the first place. What are these colours of which you speak?

Let’s have a look:

It’s got room for two reds, two purples, two yellows, two greens and four blues, but no space for orange? Or brown? Or pink (although ‘fuchsia’ is running that one close)? What a mess!

Let’s go through these colours in order:

I make that six actual colours…

And that’s the thing, most things can be correctly described as a lighter or darker version of an actual colour. Like navy is just dark blue

Alternatively, something can be described as a mix of two real colours. Like aqua is a greeny blue.

Or even, and this is pushing the boat out a bit, things can be called a lighter or darker version of a mixture of two real colours. Like teal is a dark greeny blue.

And, as for silver being used as a colour… Nope!

Metals can’t be used to identify colours, because metals have a lustre. A sheen. A reflective surface. No matter how accurately you try and recreate this as a colour, it can’t be done. So stop it!

Which brings us on to fruit.

Peach, you see, is simply pinky orange. And pumpkin is, dark orange.

“But what about Orange itself, eh?!” I hear you cry, “The colour is named after the fruit!”

“Sure,” I reply, “In the English language, that is true… But what about other languages? Hmmmm?!”

Anyway, while you mull that one over, I refer you to the image of the rainbow, above. The band of orange is clear and present, it just used to be known by another name: Saffron! I recognise that this doesn’t help my case much; the name for the colour being derived from part of the flower of a plant, instead of the fruit of another plant.

That said, saffron doesn’t seem to have been used that much. Typically, red was just used where orange should have been. Which is why we have:

Yes, my wife and daughters (and one of my cats) are gingers.

Okay, fine! Orange is named after the fruit.

There, I said it. And let me show you why it shouldn’t be used to set a precedent:

Naming colours after fruits is madness, because every fruit comes in a multitude of different colours. There are loads of varieties of peach, for example, which shade of pinky orange were you thinking of? And oranges spend half their time being green!

Look, I understand that the healthy human eye can identify 1,000,000 distinct shades, but do women really have to give them all names?! Especially if men can only see 16 colours…

You see, the thing about it being a healthy human eye that can see 1,000,000 colours is important. Because colour blindness exists. And it disproportionately effects men. Frankly, for a lot of men, physically being able to see 16 colours is something they can only dream of…

And this remains true, right up to the first time their wife drags them off shopping for paint. Then, almost immediately, they’ll wish for the good old days, when all they could see were grays. Not, of course, that any of this is related to the fact we’re doing an awful lot of painting and decorating around the house, at the moment.

You know, just as an example.

And even if you can see all the colours, no one seems to be able to agree how they should be arranged.

In the RGB (Red, Green, Blue) and RYB (Red, Yellow, Blue) colour wheels, the initials denote the primary colours. Primary colours, in theory, (colour theory, in fact) being the colours from which all other colours can be developed.

I have no desire to get dragged down this particular rabbit hole. Particularly since the arguments seem to have started more than 600 years ago with the thoughts of Leone Battista Alberti, and involve people like Leonardo da Vinci and Isaac Newton. Another thing that puts me off getting involved is that there is a conflict between art and science…

Colours, in essence, are simply wavelengths of light in the visible spectrum. As such, they can be scientifically described and documented. The human eye, for example, has cone cells in the retina, which can identify light. There are three types of cone cells, S, M and L, which detect blue, green and red light, respectively.

Except, of course, they don’t really – the cover photo details the peak wavelength that each type of cone detects. And it’s not ‘blue’, ‘green’ and ‘red’. Regardless, of that, this is why things like TV screens and monitors used to be made up of red, blue and green emitters…

Artists, on the other hand, have no intention of putting up with this crap.

They will simply point at your printer and say something like, “Oh, so blue, green and red are the primary colours, are they? So, tell me; what colours are the cartridges in your printer?!”

Your most probable response to this will be something like, “I don’t know. Why the Hell would I even know that?!”

But, after a bit of research, you’ll see that the cartridge colours are: cyan, magenta and yellow. Or, more accurately, and in keeping with the point of this post: light blue, light purple and yellow. Either way; definitely not blue, green and red…

In fact, and assuming there’s no way for you to escape, an artist will then go on to show that with cyan, magenta and yellow, you can make blue, green and red. Which means, by definition, blue, green and red can’t be primary colours, because they can be made by other colours.

You could try crying, at this stage, but it probably won’t help. Although, if said artist then starts espousing about: how there’s no colour for magenta, so it doesn’t really exist, you’re just going to have to make a run for it!

Oh, and talking about colours that don’t exist: Taupe. NOT A COLOUR!

Taupe is just the French word for Mole. You know, the little. blind ratty things that swim through the soil of your garden? Yeah; them!

And, as I’m sure we can all agree, there’s no place in the English language for French words…!

And even if there were, there would still be no place for ‘taupe’.

So, anyway; that’s why men can only see in 16 colours.

And if men can’t really only see in 16 colours, sometimes they might wish they could…