PrevPreviousWhat is the Point of Movember?
NextWhich Sugar is the Good Sugar?Next 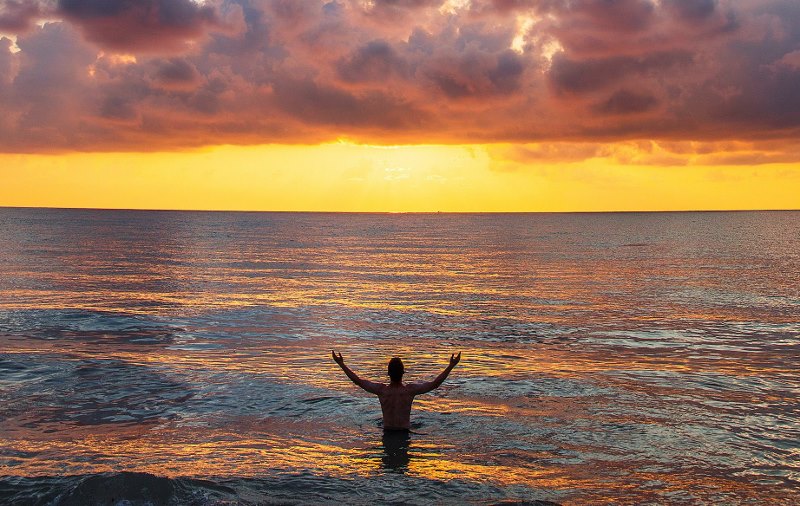 At the start of 2018, I was in a pretty good place, when it came to Living with Cancer. The last time any new tumours had appeared was in February 2016, when I had my second recurrence. Since then, I’d come off the medication for my depression and had my colostomy reversed. Most recently, I’d managed to come to terms with the background anxiety all this was causing me. On my more optimistic days, I dared to dream that I might never have a third bowel cancer recurrence.

By the time my CT and MRI scans rolled around, on the 2nd and 7th of February, I was already actively dieting. In fairness, though, this was nothing to do with the cancer. Instead, I was dieting because I was so heavy that my knees were actually swelling up after each hockey match, which was no fun at all. But regardless of the specific reasons why I was losing weight; I was losing weight. And this was because I was looking to the future. And it had been a very long time since I’d been able to look to the future.

This nearsightedness was the reason I hadn’t been able to diet for so long. It wasn’t that I didn’t need to. Not even that I didn’t want to. It was simply that I couldn’t find the enthusiasm to do so, as I explain in my journal:

“I mean, I’ve talked about dieting a lot, and been filled with good intentions, but the reality is that I’ve never really come close to starting once, because it all seems so pointless. Plus, you know, it’s the extra weight that’ll keep me going in those last weeks and months.”

It’s hard to make yourself diet when you’re so sure that you’re only one meeting away from being told that the end is nigh. At the point you are told this, as far as I can make out, the heavier you are the longer you can hang on. I’m aware that this is a vast oversimplification, but it sure doesn’t encourage weight loss…

But that mindset seemed to be behind me, which was just as well, because it meant I was a bit lighter when we went skiing. Our ski trip had deliberately been arranged to fall between: having the scans, and; getting their results. The idea was that this would serve as a distraction and I wouldn’t feel my usual levels of scan related anxiety (scanxiety). If I’m honest, as plans go, this wasn’t one of the best.

Inevitably, when I went to meet with my oncologist, on the 21st February, I was quite nervous. I was also, I think, quite resigned to the probability of a third bowel cancer recurrence. The last thing I said to Julie, before we went in, was, ‘don’t get you hopes up’. Because Julie, too, had started to think in terms of years, instead of months. Both of us had been getting ahead of ourselves.

Because my third bowel cancer recurrence had arrived.

And it was a doozy!

As I’d known all along, the chemotherapy I’d been given, once I started palliative care back in 2016, wasn’t expected to wipe out my tumours. Just knock them back, or debulk them, as the terminology goes. Consequently, I’d expected the tumours that were in place at the start of that palliative chemotherapy to come back at some point. These tumours were:

My hope had always been that, when they came back, they’d do so in a nice orderly fashion and one at a time. In this way, they could be surgically removed, one at a time, and I’d find a way to soldier on. Maybe even beat the odds and get through this…

Now, I know that this last sentence may seem naive. Overly optimistic, perhaps. Especially from me, who has a reputation of being so realistic that I can come across as pessimistic. Well, it turns out that I’m human after all. Human nature depends on hope, in a number of situations. The hope that it will happen to you, no matter how unlikely: gambling. The hope that it won’t happen to you, no matter how likely: smoking.

For me, it’s that I can survive my cancer long enough to get to at least the third item on my list:

My hope is that I can stick around at least long enough to get to the point that the girls no longer need me in their lives. I’d like to think they’d always want me around, but they’ll get to the point they no longer need me. To keep me functional in this process, I need to believe I can see a way through. Otherwise I’ll just be lost to depression. Thus, providing the cancers come back, just so, and providing they’re operable; maybe I can beat the odds and get through this!

That last paragraph was a very strange one to write. For a long time now, I’ve been convinced that I’m without belief in anything. That there is no actual requirement for belief at all. And here I am, believing away… Still, that’s some soul-searching for another time.

Interlude over and back to the meeting with my oncologist. Back to being told about my third bowel cancer recurrence. Where I was given the results of my scans:

“These have unfortunately identified a new liver metastasis and also a small left lung, upper lobe nodule which is just a little larger and therefore highly likely to represent a metastatic site of disease as well.”

Such a short sentence manages to fit in so much Nope!

This third bowel cancer recurrence was a multi-system recurrence, which had prohibited surgery the last time it happened. It also involved a ‘new’ liver metastasis. Not one of the three that were around before I started the palliative chemotherapy. A new one. To me, this meant:

That was my thought process as the oncologist told me about the scan results. I could literally feel myself sinking into depression. I forced myself to try and remain positive and said, “Okay, two systems means no surgery, so what are my options?”

Which is where things started getting a bit more positive.

The oncologist said that, at this stage, nothing was off the table. I had to seek clarification about that; did she include surgery? She did! And she’s remarkably blunt. Her technique is to manage patient expectations by limiting optimism. Which works for me, but I imagine others might struggle. Anyway, if she’s saying surgery is still an option, then I could trust that surgery was still an option.

Maybe my third bowel cancer recurrence wasn’t going to do for me after all.

She described the tumour in my lung as behaving ‘indolently’. I had to ask her what that meant… Basically, the tumour was lazy; barely putting any effort into growing fast enough to kill me. I’ve got to say, I admire that in a tumour.

To confirm that this was, indeed, the case, she packed me off for a PET/CT scan and arranged to meet me again in four weeks. In the meantime, I was forced to tell all this to my daughters, parents and brothers. Always the most miserable aspect of any new bit of bad news. My parents always take it hard. My daughters seem to be getting more used to it. Which made me realise a horrifying fact: this has been going on for a quarter of their lives. I know I’m not supposed to feel guilty, but how can I not? Thankfully, somehow, they’re both remarkably good kids, who make me incredibly proud to be their dad.

When the call came through to arrange the date for the PET/CT scan, the (Australian) guy doing the assessment asked whether I knew what to expect. I said that I did, and that this, ‘wasn’t my first rodeo.’ Being an Aussie, he pounced on this and asked if I’d be arriving for the scan dressed as a cowboy. And that’s how I ended up wearing a cowboy hat to my PET/CT scan.

Besides the actual scan, though, the waiting time was very stressful. It was literally the wait to hear whether I had a meaningful future or not. Whether I would even be able to make point 1 of my list (about 18 months), let alone any of the others. This was not helped when the date of my appointment was knocked back a week, meaning I was on tenterhooks for five full weeks.

During this wait, I noticed something fascinating about what the stress and scanxiety does to you. I even posted a graph about it on Facebook: 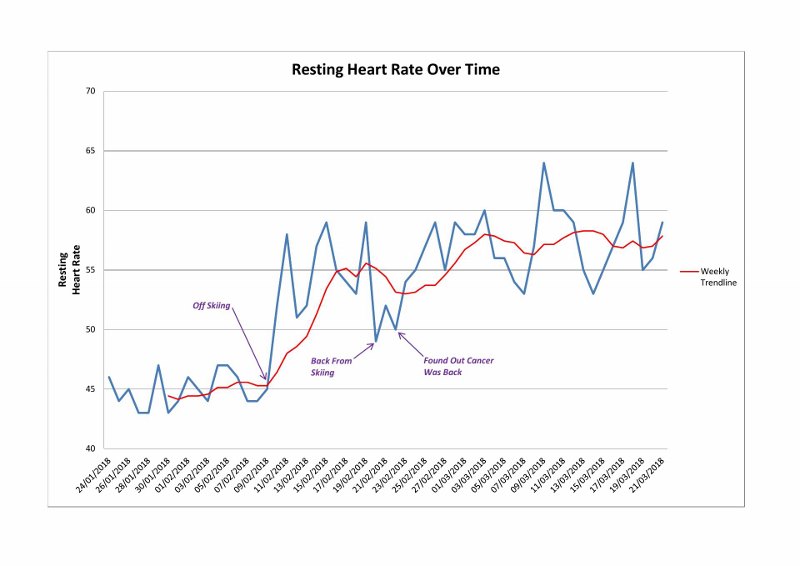 What the news of my third bowel cancer recurrence did to my resting heart rate.

I was wearing a fitness tracker by this stage, and one of the things I kept an eye on, was my resting heart rate. For me, this is normally around, or just under, 50 beats per minute (bpm). A lot of this is simply down to genetics, both my father and one of my brothers also have a naturally slow heart rate (not Simon, though…). Another aspect is the simple proof that it’s possible to be fat and fit.

Anyway, my pulse was around 45 bpm up to the point I went skiing. It then jumped to 55 bpm during skiing, when we were sleeping at an altitude of 2,000m. The rate starts to come down after skiing until, Bam! I get told about my third bowel cancer recurrence, and my resting heart rate jumps to 58 bpm.

The reason this is so fascinating is that the purely psychological stress to the news, of my third bowel cancer recurrence, resulted in a greater impact on my bpm than the physiological stress of living at altitude…

Something that was completely in my head had a greater impact, on my body, than sleeping and exercising at more than a mile above sea level. Mind: blown!

The reason the oncologist gave, for delaying our meeting, was to allow her to gather all the necessary information. While it was hard, at the time, it was soooo worth it. What she’d been doing was discussing the results of my PET/CT scans with surgeons. One was my usual liver surgeon, but the lung metastasis needed a thoracic specialist. Well, she spoke to one and they both agreed to operate…

So, even though I was on palliative care. Even though this was my third bowel cancer recurrence. And even though it was a multi-system recurrence. They were going to operate on me. In case you’re wondering whether this had an impact on my bpm as well; it did:

And, there you have it; proof if ever it was needed: stress and anxiety have a real, physical impact on your body.

It almost goes without saying that I was thrilled to hear that I was going to be cut open by two different people. And that’s not a sentence you get to hear very often! So, I’d finally had my third cancer recurrence and it was in two systems and in a new location in my liver. Still, at least nothing else could crop up, right…?!

PrevPreviousWhat is the Point of Movember?
NextWhich Sugar is the Good Sugar?Next