What are Nuts? What are you Actually Eating?! 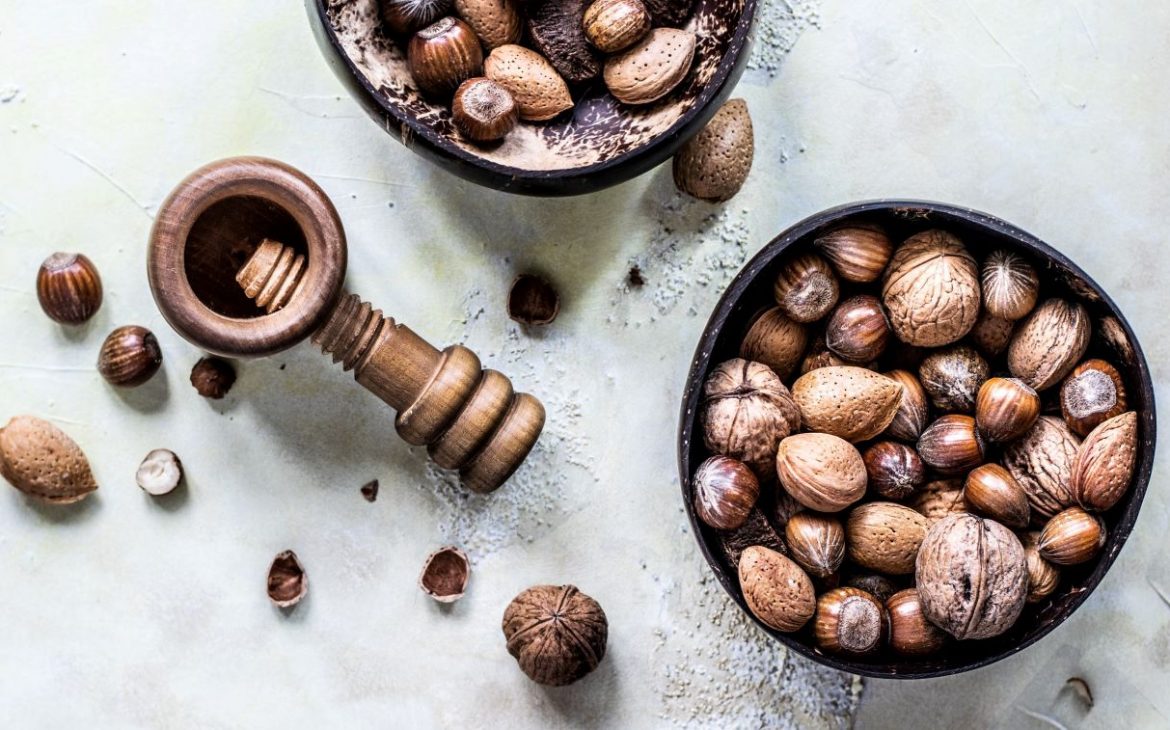 I’ve talked about nuts before, back when I was pointing out how easy it was for them to mess up a diet. I mean, sure, they’re delicious and tend to contain the healthier kind of fats, which are an important part of a balanced diet. On the flip side, you can get those healthy fats from olive oil in salad dressings and rapeseed (canola) oil when you’re frying. Oh yeah, and nuts are also insanely calorific! The five nuts that I talked about in that post had an average of 667 calories per 100g, nearly twice as much as New York cheesecake…

Anyway, another thing I mentioned in that post was that some of the ‘nuts’ weren’t even nuts at all. So, I thought it was about time that I cleared up what I meant by this and, as I’ve previously done with spices, find out just what it is that we’re putting in our mouths.

Botanically speaking, a nut is a seed with a coat that becomes increasingly hard as it matures. But the thing that really makes a ‘nut’ a nut is that it is indehiscent, which is to say that it doesn’t open at maturity. In nature, the only ways that a nut gets to see the light of day is through the decay of the shell, or that shell being broken open and eaten. The latter route being our preferred method, especially at Christmas… Which is fast approaching… Making this post my first of the Festive Season.

So, let’s take a look at 12 of our favourite nuts and work out which of them, if any, have been lying to us all this time.

And we’ve hit our first liar immediately, because an Almond is not a nut, it’s a Drupe.

A drupe is the stone you find inside a fruit, which, in the case of the Almond, is a species of Peach. The Almond ‘nut’ is found inside the shell of the stone, inside the flesh of the fruit.

The Almond tree originated in Iran but is now widely grown in places with suitable climates. So, while Iran remains one of the biggest growers of Almonds, it has been joined by countries as far afield as Morrocco, Spain and the USA.

Despte not being a nut, Almonds have many culinary uses including butter; flour; milk, and, far more importantly; marzipan and macarons. Bitter Almonds, on the other hand, are full of cyanide and really dangerous to eat so, naturally, some Muppet decided it would make an excellent cancer cure!

Despite being called the ‘Brazil Nut’, also not a nut but, instead, a Capsule Seed (as you can see from the photo).

The capsules that contain said seeds can grow up to 2 kg (4.5 lb), so I think it’s fair to say that you don’t want one of those falling on your head when you’re walking through the forest…

As the name suggests, this ‘nut’ is native to Brazil and the surrounding countries. Brazil Nut trees are among the biggest and longest living in that part of the World and, unfortunately, the wood of the tree is highly prized in carpentry and construction.

Brazil Nuts have high concentrations of Selenium. Really high…! In fact, 200g of Brazil Nuts contains 300 times Germany’s recommended daily intake of Selenium. The symptoms of a Selenium overdose are like those of radiation poisoning, which is an odd coincidence, because Brazil Nuts also contain Radium…! (House, M.D. did an episode on this very thing)

Yeah, so obviously not a nut that I don’t even think it’s trying…

The Cashew ‘nut’ is the bluey-grey thing that looks like it’s oozing from the fruit above… Yummy! This ‘nut’ is really the seed element from the drupe in the ‘apple’.

The Cashew also originated in Brazil and, in a different World, could have ended up being called the ‘Brazil Nut’. As it is, Cashews are now more associated with India and the Ivory Coast, which are the largest producers and exporters.

Not only can Cashews be used to make butter and cheese but the flesh of the apple can be processed into a drink and then fermented and distilled into a liquor. And now I know this liquor exists, I really want to try some.

The Sweet Chestnut, not to be confused with the Horse Chestnut (Conker) to which it’s only distantly related, is also known as the Spanish Chestnut and the Marron (in France). The tree has been cultivated since ancient times and originated in Southern Europe, which might explain why the nuts you get from British trees seem so underdeveloped.

Quite why the Chestnut, with it’s quite weak shell, qualifies as a nut when the infinitely tougher Brazil Nut does not, escapes me. But then that’s botanists for you.

Another ‘nut’ with “nut” in its name and an impossibly hard shell so, naturally, it’s not actually a nut. No, botanically the Coconut is another drupe. Although this one, apparently, is a ‘dry drupe’, whatever that means…?!

Despite coming from the tropical regions of the World, the name is Portuguese in origin, derived from ‘coco’, meaning skull, because of the facial features formed by the three indentations in the shell.

More than 60 million tonnes of Coconuts are harvested each year, making it the most produced of all the nuts.

There is, though, more to the Coconut tree than just the flesh and water of the nut. Coir, from the husk of the shell, is used in many materials and the wood is used both as fuel and a building material.

It’s another one that grows in Britain and it’s our second real nut… Makes you wonder whether the botanists that decided all this were British?

Speaking of the British, we’ve been scoffing these things for at least 8,000 years! Hundreds of thousands of shells were found in a pit on the Inner Hebridean island of Colonsay. Other Mesolithic evidence of Hazelnut use has been found in Farnham, Surrey and the Isle of Man.

Which is all fine and dandy, but if you’re not using Hazelnuts to make Praline, you’re doing it wrong!

Despite how much the Brits like their Hazelnuts, most of them are now grown in Turkey… Where Santa Claus came from…

The only Australian entry in the list and despite how nutty the Aussies might be, the Macadamia isn’t one of them. It’s a seed.

These days, however, the bulk of Macadamia Nut production takes place in South Africa.

And regardless of its history in Australia, the Macadamia nut is named after the chemist, turned politician, John Macadam who, as his name might suggest, was a Scot.

Finally, another ‘nut’ that’s true to its name… because it’s a Pea! Well, a legume really, but definitely not a nut.

Oh, and they don’t grow on trees. Because, like the name says, it’s a ‘pea’. If you were looking to harvest peas, you wouldn’t go looking up in trees, would you? No, you’d look for pods in bushes. Well, you can’t do that with Peanuts either, because they’re part of the root system, meaning you need to dig them up.

The Pecan is a type of Hickory that originated in the southern USA and northern Mexico, around the Mississippi River. It’s so important to the American States of the region that it features in the State Symbols of Alabama, Arkansas, California, Oklahoma, and Texas.

It’s not a nut, though… Not even a drupe. The Pecan, as it turns out, is a ‘Pseudo-Drupe’! I have no idea what makes a thing a pseudo-drupe, and I think we can all agree that it’s not that important. What is important is that Americans seem to think that they can use Pecans, as a substitute to Hazelnuts, to make Praline…

To be fair, it’s probably not all Americans that believe this fallacy, but the ones that do?

These things are so painfully, obviously seeds that I feel embarrassed for them being labelled nuts in the first place.

Different parts of the World get their Pine Nuts from different, local species of Pines. In Asia it’s the Korean Pine and the Chilgoza Pine, in Europe we have the Stone Pine, while in North America it’s Pinyon Pines.

As the name suggests, these ‘nuts’ are found in the cones of Pine trees. Not all Pine trees, mind: just 29 species of Pine offer edible ‘nuts’ and only 20 of those are used commercially.

Technically speaking, the seeds from other Pinecones are also edible, it’s just that they’re so insignificant that it would take more energy to collect them than you’d get by eating them. Making them utterly pointless as a food source. A bit like celery…

Pistachios are related to Cashews and, much like the Cashew, they’re drupes as opposed to nuts. However, whereas the Cashews came from the lush jungles of South America, the Pistachio emerged from the deserts of Central Asia and the Middle East.

Archaeological finds have shown that Pistachios have been a common food source for nearly 9,000 years and have been cultivated since the Bronze Age.

Pistachios are another of those ‘nuts’ that have become an important part of confectionary, which forgives a lot in my book. On top of being an important element of Baklava, they also make a very fine ice-cream, which I heartily recommend to anyone who hasn’t tried it.

Today, Iran and the USA combine to produce around three quarters of the World’s Pistachio. Finally, something those two can agree about!

The Walnut is similar to the Pecan, while being superior in every way. It is, however, still a ‘pseudo-drupe’ and not a nut. On an unrelated note, the most commonly eaten Walnut, the Juglans regia, is known as the English Walnut…!

Despite my dubious choice of the name of this plant, it originated in Iran, hence it’s other name of Persian Walnut. Not that the name you opt for really matters, because most of the World’s Walnuts are now grown in China.

Wherever the nut comes from, though, you need to make sure you store it properly. Improper storage can lead to the development of a mold that produces Aflatoxin: a wildly dangerous carcinogen.

Maybe Pecans aren’t so bad after all…!?

At least in the Botanical sense.

However, and to quote Wikipedia, “Common usage of the term often refers to any hard-walled, edible kernel as a nut.” Essentially meaning that anything we choose to call a nut, becomes a nut, which kinda works in the end.

Besides, and most importantly of all, they’re all nuts in the culinary sense because they’re just so good to eat. Well, you know, except for the 1% of the population with nut allergies, for whom eating some of these can be potentially fatal…