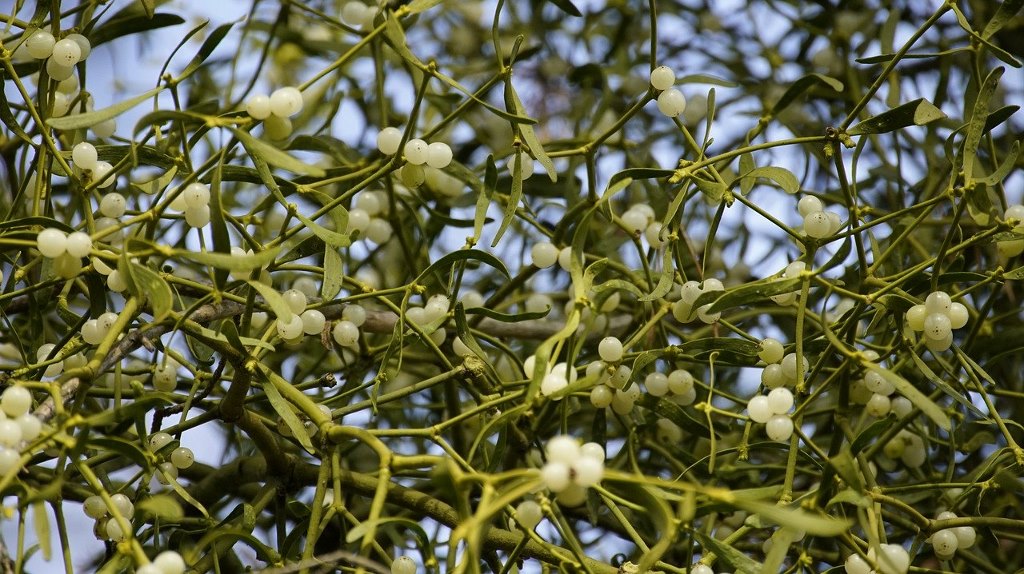 Strange as it may seem, but there is a purported cure for cancer, that is also a traditional emblem of the yuletide tradition. I am, of course, referring to mistletoe. So, as Christmas fast approaches, let me consider an oddly festive question. Can mistletoe cure cancer?

Mistletoe is a parasitic evergreen plant that lives on other plants. While there are many different types of mistletoe, I’ll be limiting this post to the varieties that live in trees. Particularly, deciduous trees. Which is to say: trees that lose their leaves in winter. As such, when a tree is heavily populated by mistletoe, it can still appear green in winter. This can be quite disconcerting, if you don’t know what you’re looking at.

Technically, mistletoe is not considered to be fully parasitic, because it can photosynthesise. This means that mistletoe can support itself during winter, if it has to. And sometimes, when it’s really taken over a tree, it is just the mistletoe that is keeping the tree going. But, as the only party to benefit from any of this is the mistletoe, it’s always going to be a parasite to my mind.

Originally, the only ‘Mistletoe’ was the European Mistletoe (Viscum Album). This, as the name suggests, can be found in much of Europe, including the British Isles. Over time, however, other hemiparasitic plants have been included under the ‘Mistletoe’ banner. This includes the Red Berry Mistletoe (Viscum Cruciatum) of the Mediterranean region. Also, the American Mistletoe (Phoradendron leucarpum) of, and I know you’re going to struggle to believe this: North America.

From there, ‘Mistletoe’ has gone on to include a huge variety of species. But I’m going to completely ignore all of them, from this point forth. In fact, moving forward, I’ll only be referring to Viscum Album, European Mistletoe.

Admittedly, this is in part, because I live in the British Isles, and this mistletoe is my local variety. But it is also because mistletoe is a traditional part of the Christmas decorations in this part of the world. Finally, and most importantly, if people are talking about mistletoe as a cure for cancer, it’s the European Mistletoe that they’ll be talking about.

On a not unrelated note, it is the European Mistletoe that is most toxic to humans. Most of this toxicity resides in the berries. Mind you, the leaves aren’t much fun either. Although eating mistletoe berries is not usually fatal in healthy adults, it can be seriously dangerous to children, the elderly and the infirm. The usual effects of eating mistletoe berries are: blurred vision, diarrhea, nausea and vomiting. However, a bad reaction can involve seizures and cardiac arrest.

So, as an early indicator of whether mistletoe is likely to be a cure for cancer, things do not seem promising.

It’s not that simple.

Digitalis, for example, comes from Foxgloves. Take too much, and you die. But take the right amount and it can treat heart problems and epilepsy.

Another example is Ergot, which is a fungus that grows on rye. Eat too much (barely any!) and you die. Take it in the right way, and it’ll sort out your migraine…

So, just because mistletoe is toxic to humans, does not mean that it can’t cure cancer.

On which note, I should point out that mistletoe has been used medicinally for centuries and, probably, millennia. In fact, mistletoe was used medicinally and/or ritually by: the Celts; the Norse; the Romans, and; the Ancient Greeks. A real who’s who of bygone European civilisations. Oh, and the ritual uses were quite often a means of getting the people conducting said rituals into an altered state…

Which is to say, high as a kite!

As an aside, why do people kiss under mistletoe? It’s unsure where the tradition started, with some sources citing the Greeks, others the Celts, and others, still, the Norse. One common thread seems to be that mistletoe is associated with virility, partly because it fruits in the depths of winter. So a couple sharing a kiss under a fruiting branch of mistletoe, must bring virility to the relationship…

It was the Christians who brought this winter tradition under the umbrella of Christmas. And it was the working class of Victorian England, who weaponised the tradition (by today’s standards):

The tradition dictated that a man was allowed to kiss any woman standing underneath mistletoe, and that bad luck would befall any woman who refused the kiss.

So, a little bit sexual harrassmenty, then. The only, very minor, saving grace, was that following each kiss, a berry was plucked from the mistletoe. And when all the berries were gone, the kissing had to stop.

Just as this digression must also stop…

that mistletoe could cure cancer, on the basis of the observation that the plant was a parasite which eventually killed its host, a process which he claimed paralleled the progression of cancer.

Professor of complementary medicine Edzard Ernst and other physicians and scientists including Simon Singh and David Gorski have characterized anthroposophic medicine as pseudoscientific quackery with no basis in reason or logic.

Needless to say, for some people, the stronger the words against an alternative medicine, the more proof is offered that it’s legitimate. And that Big Pharma is controlling the narrative…

Sadly, there’s no helping some people.

Not that there is really anyone still claiming that mistletoe, alone, can cure cancer. Because, if mistletoe could cure cancer like that, all I’d have to do is wander outside, grab some off the tree and start chewing. The reality is, though, that doing so would only lead to vomiting, diarrhea and possible seizures.

So, if nobody is arguing that I can just grab some mistletoe and cure my cancer, what are they saying? How, then, can mistletoe cure cancer?

Well, by taking extracts of the mistletoe, and turning them into a medication, of course. Maybe labelling it as ‘Mistletoe Therapy’ and selling it through the pharmaceutical industry…!

Or, perhaps, the Alt Pharma arm of Big Pharma… Like there’s a difference!

A good place to start looking at mistletoe therapy, if you’re part of the English speaking world, is the Believe Big website. The main inspiration for which is Ivelisse’s Story. Ivelisse’s story shares many similarities with my own:

The divergence, in our stories, relates to chemotherapy. I went with the chemotherapy option. Ivelisse did not:

After surgery, Ivelisse began her prescribed protocol by her complementary and alternative doctor which included daily alternating injections of mistletoe and thymus, cimetidine, homeopathic remedies and additional supplements.

And why shouldn’t she take this route?

After all, Ivelisse’s surgeries were successful, and she was told that, “In her case chemotherapy would only increase her survival rate by only 10-13%.” And so, after she and her husband had, “bathed the whole process in prayer“, Ivelisse chose an alternative approach. And, in the years since, Ivelisse has not suffered a recurrence. Indeed, she is now in remission.

Inspired by her recovery, Ivelisse and her husband set up the Believe Big Institute of Health. This is a, “non-profit Christian organisation”. Believe Big’s stated aim is to bridge the gap between conventional and complementary medicine for fighting cancer. The organisation has a store, which sells non-medicinal products. The 2019 annual report showed that the organisation had $734,897 in the way of expanses. Ivelisse and her husband sit on the board, so I assume they draw some sort of income from Believe Big.

All of which makes it seem that Ivelisse and her husband now make their living by sharing and promoting mistletoe therapy. The thing they associate with Ivelisse’s recovery form cancer.

Personally, I don’t agree with the conclusion that Ivelisse has reached. I would argue that the surgeries successfully removed all traces of her cancer. That she then chose to use mistletoe therapy, is neither here nor there. To my mind, the surgery cured her cancer. So, whatever Ivelisse did after she was cured, had no bearing on her cancer in the slightest.

It is, however, impossible to be certain, one way or the other. And, on principle, I have absolutely no objection to Ivelisse making a living by talking about her experiences. Providing she’s not risking the health of any other cancer patients…

And this is where things get tricky for me. In the page devoted to Ivelisse’s Story, a statement is pulled out of the text, for emphasis. It reads, in a large, capitalised font: “IVELISSE BEAT THE 8% SURVIVAL RATE OF STAGE IV COLON CANCER“.

While this statement is technically true, what it more true is the following:

If the cancer has spread into the liver and the surgeon can remove it, more than 40 out of 100 people (more than 40%) will survive their cancer for 5 years or more after their operation.

After a successful liver resection, the true survival rate, for stage 4 colon cancer patients, is five times higher than what is listed on the Believe Big website. And, It is this sort of misrepresentation that concerns me. Because it could misdirect cancer patients away from conventional treatments.

Except that homeopathy is quackier than a pond full of hungry ducks!

But, at least the Believe Big site does not make any claims that mistletoe can cure cancer. In fact, it seems that there are now very few advocates of mistletoe therapy as an actual cure for cancer. Which is excellent news.

Because, to date, there has been no research that indicates that mistletoe therapy is a cure for cancer.

But, as a complimentary therapy, to run alongside conventional cancer treatments? Well, that’s a different story.

While, currently, no mistletoe-based drugs have been licensed in the USA or the UK, the same is not true for Europe. Germany, particularly, is fully onboard with the idea of mistletoe therapy. So much so, that German health insurers cover the costs of some 30 mistletoe-based medications. Sweden, also, has approved mistletoe therapy for use in cancer patients.

It should be noted that these mistletoe therapies are complimentary to the conventional treatments. And, in many cases, they are focused on relieving symptoms during palliative care.

Much of the research supporting the efficacy of mistletoe therapy comes from Germany. Something reflected in the claims made on this German site:

The first seven items on this list are largely fine. It’s the last four that raise concerns…

Saying things like, “Can inhibit the growth of cancer cells.” And, “Can prevent relapses and metastases,” is starting to sound dangerously like they are claiming that mistletoe therapy can cure cancer.

Because there is most assuredly no proof that this is the case.

When it comes to using mistletoe therapy as complimentary or adjunctive therapy, things are a bit more murky. There is plenty of research indicating that mistletoe therapy can relieve symptoms like pain and nausea. Likewise, there is plenty of other research suggesting that the methodology of the first lot of research was faulty. And there is still more research that says: more research is needed!

For my part, I’m willing to give mistletoe therapy the benefit of the doubt, if used solely as a complimentary therapy. Much like the use of cannabis and THC, there seems to be some evidence that it helps reduce the pain and discomfort of cancer patients. And even if this is only through the placebo effect, that’s good enough for me.

What is clear from all the research, is that mistletoe therapy has remarkably little in the way of side effects. So, to my mind, if someone wants to use mistletoe therapy as a complimentary treatment, they should go for it. Providing they’ve checked with their oncologist first.

If it eases your pain and nausea, when other things haven’t, it’s worth it.

Just don’t go expecting mistletoe therapy to cure your cancer, because, unfortunately, it’s not going to be able to that.