How Many Internal Organs Can I Live Without? 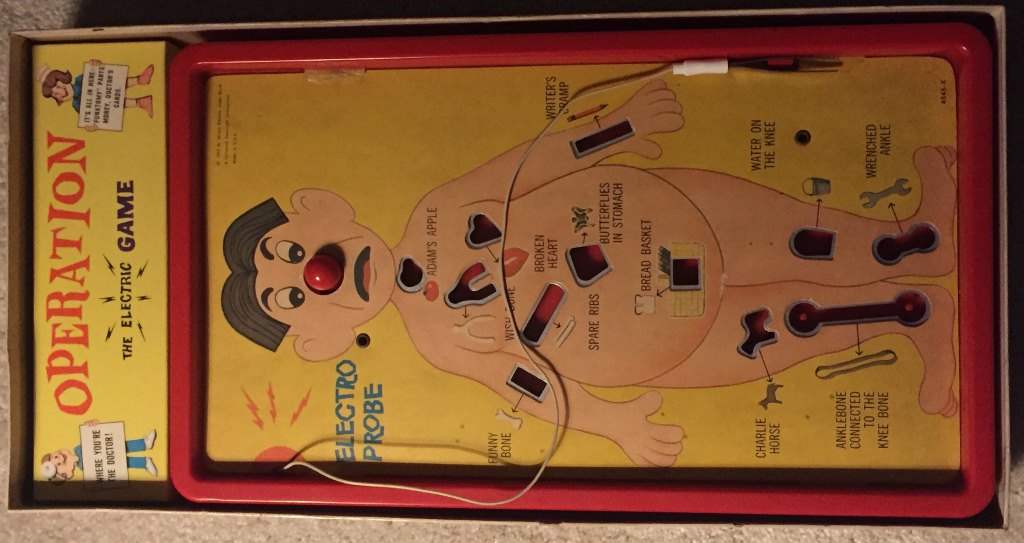 So, on Tuesday 28th April 2020 I start my latest round of treatment for my ongoing squabble with Bowel Cancer. This time it’ll be a form of Radiotherapy called Stereotactic Ablative Radiotherapy, or SABR for short. The SABR will be tackling the quite sizable tumour in my liver. The location of the tumour means there is a real risk of damage to my stomach. This got me thinking about how many bits of me have already been removed. Which, naturally, made me wonder how many of my internal organs I could live without…

There’s actually no need for there to be any risk to my stomach. In normal circumstances, the SABR procedure would be done under general anaesthetic. Keyhole surgery would be used to allow probes to hold my stomach out of the way of the radiation. Currently, though, there are precious few surgeries available for cancer patients, due to the Coronavirus Pandemic.

But I’m going to resist the temptation to get drawn into a rant about my views on the decision making process regarding actual cancer patients, versus potential Coronavirus patients. I’ll save that for my April Progress Report, on my Cancer Dad site.

Just know that the decision to prevent cancer patients from having surgeries means I’m facing serious damage to my stomach. Unnecessarily, in my opinion. But, regardless, this is what got me to wondering how many of my internal organs I can live without…

So, let’s establish a couple of parameters, here.

Firstly, I’m only going to be talking about the internal organs that I can live without. As such, I won’t be discussing parts like sensory organs and limbs. People can, and do, live amazing lives without things like their eyes, or their arms. And, while I’m in awe of such people, that’s a whole different post.

Secondly, I’m going to try and stick to the internal organs you can live without, that also don’t require a massive change of lifestyle. I imagine I will be both quite broad and quite inconsistent with this latter parameter, depending on what I end up talking about…

So, let’s start by listing the internal organs that I am already living without:

In addition to this, there are also several internal organs that I am living without bits of:

And the only impact on me, from the removal of all of those parts, is that I have to take one 50 μg tablet of Levothyroxine each day.

But, what are these missing bits supposed to be doing, I hear you cry; how come you don’t need them?

Well, good question. Let’s start with the complete internal organs that I now live without.

I lost my (palatine) tonsils and my adenoids during a tonsillectomy. Both structures are part of the lymphatic structure and act as the first line of the immune response against things that you eat. And, as it turns out, not having them makes no difference at all.

The gallbladder lives in the shadow of the liver. It acts as a storage facility for the bile, which the liver produces. Bile aids in the digestion of fats in the small intestine. Not having the gall bladder doesn’t mean the production of bile stops, it just means that any excess bile can’t be stored. Bile still makes its way into the intestines and you now can’t get gall stones any more. As such, the gallbladder is an internal organ that you can easily live without.

Lymph nodes are, as the name would suggest, another part of the lymphatic system. They are, technically, secondary lymphoid organs, and are part of both the immune and the circulatory systems. The nodes themselves, make white blood cells and also mop up foreign cells. Losing one lymph node is no big deal. Losing a lot of them will leave you immunocompromised.

Moving on to the internal organs that I’m missing bits of, and starting with the liver. I’m mainly starting here because, as it stands, this is a bit of a cheat. All the bits of liver that I’ve had cut out, so far, have simply grown back. The liver is good like that. The liver has a great many functions but one of the important ones is converting the food you eat into energy you can use. And, while you can’t live without a liver, you can afford to lose a lot of it, as it will regenerate.

That said, this regeneration process only goes so far. If all that’s being removed is liver tissue, it will all happily grow back. If, on the other hand, the blood vessels that supply the liver tissue are also taken, then not all the tissue can grow back. The lack of blood supply will limit the total possible regeneration. This, incidentally, is what I’m most likely to be facing when all this Coronavirus and SABR kerfuffle dies down.

Moving on to the Thyroid gland. This sits in your throat and consists of two distinct lobes. As such, removing half of the thyroid is easy: just take one of the lobes. The thyroid is part of the endocrine system, meaning it is involved with hormones. In particular, in the case of the thyroid gland, we’re dealing with thyroxine; a hormone related to metabolism and growth. With this particular internal organ, it’s quite possible to live without half of it, providing you take a tablet each day.

In actual fact, you can live without the whole organ, but more tablets are involved.

Finally, the other bits…

I lost a small amount of my left lung and it had virtually no impact on my overall lung capacity. Likewise with my large intestine. Maybe 10% of my colon was removed and I haven’t noticed a thing. To be fair, the biggest role of the colon is the re-absorption of water from the stool, so all I should have to worry about is slightly looser stool. But I haven’t even had to worry about that.

That’s all the internal organs, and parts thereof, that’s I currently live without. But, what else is superfluous to requirements?

Well, as I’ve mentioned, the rest of the thyroid could go. But at the cost of another daily tablet, or two. Clearly something you can live without, then.

And the same is true of the rest of that lung. It’s perfectly possible to get by with just the one lung. There is some evidence that the remaining lung actually makes the most of its newfound space, and increases in capacity somewhat. As such, the loss of a lung will eventually leave you with as much of 60% of your original lung capacity. Sure, this will restrict you from some activities that require large and sustained exertion.

But how often are you currently doing activities that require large and sustained exertion? Be honest now…

Living with one lung is fine.

The same is true of other internal organs you have spares of:

That’s right, you can really live with half a brain. This will come as no surprise to anyone who’s met my brother Alan…

Okay, it’s not really half of the entire brain. But it’s pretty close. There is a procedure called a Hemispherectomy, which involves the removal of a cerebral hemisphere. Incredibly, losing half of this part of the brain doesn’t seem to make much difference:

Studies have found no significant long-term effects on memory, personality, or humor, and minimal changes in cognitive function overall.

I find this genuinely astonishing but, at the same time, it’s kinda reassuring to know.

That’s a scary thought, really. For those with money issues and a healthy body, how real must the temptation be…?!

So, that’s a lot of internal organs that it’s easy to live without, because of built-in redundancies. But what about organs that we don’t keep spares of? Surely there can’t be any of those that we don’t need…?

And, let’s not forget, these are internal organs that can be taken out with little, or no, consequence:

Starting with the uterus first, there can clearly be serious consequences to losing this particular internal organ. But for those who have already given birth to all the children they wish to carry, the loss of the uterus has minimal physical impact on life. There are, however, many reports of significant psychological repercussions at the loss of this organ. It is, however, entirely possible to live a perfectly normal life after the removal of the uterus.

Moving on to safer ground, and the appendix. Not only it possible to live without the appendix, there are many that argue that it’s better to live without an appendix, because doing so removes the risk of appendicitis. Tied in with this opinion is the consideration that the appendix is a vestigial organ in humans. Which is to say, an organ that we have evolved past the point of needing, but has not yet fully disappeared from our physiology.

More recently, though, there have been arguments that the appendix is actually still an important part of the digestive process. It may be that the appendix has functions within the immune system and also helps maintain the balance of the bacteria in the intestines.

Personally, none of this is important to me. What is important, certainly in relation to this post, is that it’s very easy to live without the appendix. So this is another internal organ that you can comfortably live without.

The spleen, on the other hand, not so much. While it is entirely possible to live a long and healthy life without a spleen, you’re always at a higher risk from infection. That’s because the spleen, like the lymph node, is part of the immune system. To some extent, the spleen is just a glorified lymph node, but don’t say that to it’s face!

The main reason it’s possible to live without a spleen is that the liver picks up the slack. Consequently, you wouldn’t want a damaged liver and the loss of the spleen. But, under normal circumstances, the spleen is definitely another internal organ that you can live without.

All of which finally brings us to the stomach. That which is about to get zapped in me. And the good news is: you can live without a stomach, too…

Needless to say, the loss of the stomach does come with a change of lifestyle… You’ll need to eat several small meals, each day, rather than a couple of big ones. There will also be a requirement to take vitamin supplements, to compensate for the lack of those absorbed through the stomach lining. I would also have thought that it’d be better to eat food that has been thoroughly broken up first.

But, essentially, eating multiple, small meals of ground up food and taking a couple of vitamin tablets is entirely manageable. Which is why I’m including the stomach among the internal organs you can readily live without. And, frankly, being able to do so comes as something of a relief, given the radiotherapy that I’ll soon be going through.

There are, in fact, a number of other internal organs that you can live without. Things like: the other ovary; the other testicle; the pancreas, etc. But all of these come with more significant knock-on effects, in terms of hormone imbalances. These effects are sufficiently large that I don’t feel I can include them within the parameters I set.

Even so, that’s an impressive array of internal organs that a person can live without. Not that I recommend that you try to tick them all off.

2 thoughts on “How Many Internal Organs Can I Live Without?”