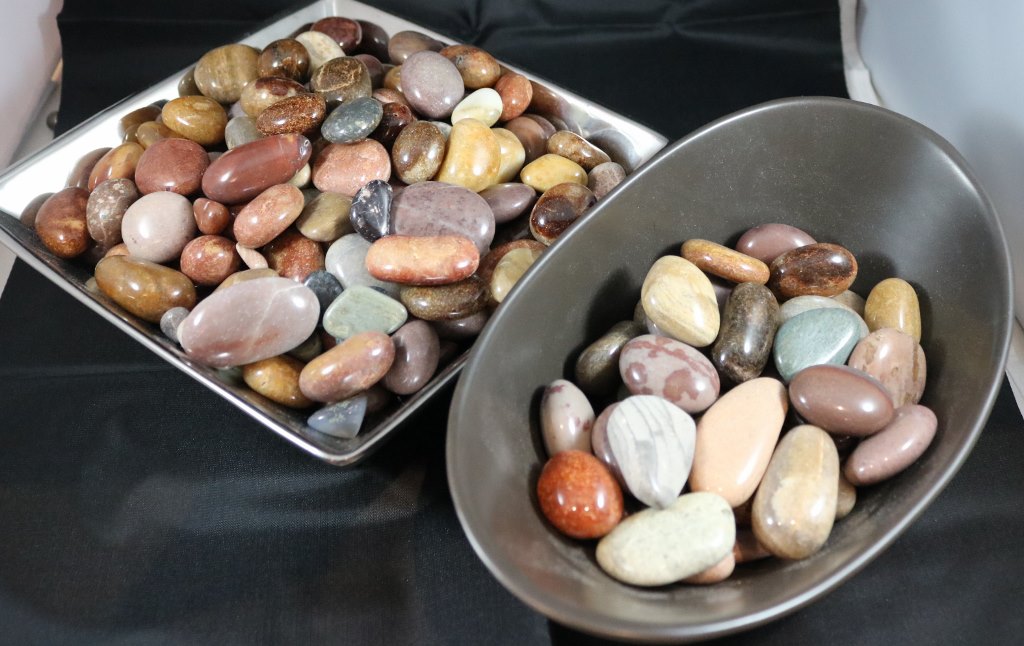 Okay, I get the feeling that this one is going to be a hard sell. Firstly, there’s the fact that I tumble my own stones. Secondly, there’s the knowledge that I had to buy a tumbling machine to do so. Thirdly, I know that the process of tumbling stones is known as Lapidary (making me a lapidarist). Finally, and perhaps most damningly, is the admission that I actually have favourite tumbled stones.

Yep, I feel there’s some abuse on the way…

Possibly not, though. Maybe, just maybe, I can show you my favourite tumbled stones and you’ll go, “Wow! Where can I get me some of that!?”

Only time will tell.

[That said, it’s tomorrow now, and I’ve taken some photos. The colours of the stones really aren’t coming across. Still, I’ve come this far, so there’s no turning back…]

For those of you who don’t yet know what I mean by tumbled stones, I’d better explain. If you’ve ever been to any of the following:

You’ll have seen bowls of smooth, polished semi-precious stones. Tiger’s Eye is always one of them. Anyway, these are tumbled stones. They’ve been ground down and polished to really bring out the best of the stone. So you buy one, because it looks amazing. But as soon as you get it home, you’ve go no idea what to do with it. So it kicks around the house for a while, until it gets lost. Then you completely forget it ever existed until you’re next in one of those shops.

Okay, so I make my own versions of those. By the bowl-load. As a hobby!

And because I have so many tumbled stones, I definitely have my favourites. I’ve picked them out and put them in their own little bowl, and everything. But, no, they don’t have names…

As you can probably guess, the source of this affliction hobby goes back to my childhood.

My parents had been away visiting one of my mum’s old school friends, in Wales. When they got back, I was given a polished stone and told that it was a gift from said friend. They said that I had to take good care of it, because it had taken the friend ages to polish the stone to the way it was.

Naturally, I was horrified!

I couldn’t fathom the amount of time it must have taken to sand and polish that small a stone, to such a polished condition. I genuinely thought that mum’s friend had used sheets of sandpaper to hand grind the stone, to get the right shape. After which, she must have spent hours with a pot of polish and a rag, to get the finish.

Why the Hell would anyone spend so many hours turning a beach pebble into this? And why then, after all those hours of work, give it to me…?

Surely she must have known that I was bound to lose it; I was eight! And she would inevitably ask after it, every time I saw her again. I simply had to keep it safe, or I’d be in so much trouble.

Fair to say, I was less than thrilled to receive that polished stone. It felt more like a burden than a gift.

But the memory (or possibly the trauma) of this stone stayed with me for decades. And when I later stumbled across stone tumbling, probably on YouTube, everything clicked into place. She hadn’t done it by hand, she’d done it by machine. She had dozens of polished stones. All she’d done was pick out a pretty stone from the batch and gift it, through my parents, to me.

And I wanted to make my own…

So I did my research and ordered a Beach Tumbler Starter Bundle from Manchester Minerals. This pack included:

I was thrilled when the pack arrived. So, I immediately set it up in the garage, and started the tumbling process. After all, there was no time to waste: it’s a four stage process that really isn’t quick. For each stage, you three quarters fill the barrel with stones, and then top it up with water. To this you add either iron filings or polish, depending on the stage. Then you seal up the barrel, and put it on the machine, which rotates the barrel, causing the stones to rub against each other. The stages are as follows:

Which all adds up to a good month of tumbling. That’s a month of stones bouncing off each other in a hard plastic barrel. Non-stop!

What I’m getting at here is that it’s not a quiet process.

Julie was less than happy with me and my machine…

But, finally, and after a lot of tuts, sighs and eye-rolls, that first batch was done. About six weeks of noisy rattling in the garage left me with… rubbish!

They really didn’t come out very well at all. They were all still angular, instead of the nice pebble shape that I was hoping for. And half of them hadn’t taken the polish. They looked… bruised, if that makes any sense?

Well, that curbed my enthusiasm for a while (much to Julie’s poorly-hidden delight).

And it wasn’t until a trip to a beach in Pembrokeshire, in South Wales, that I tried again. We were wandering along the beach, as a family, idly looking for fossils or anything else interesting, when I started noticing the pebbles. They were amazing colours. And they were already the perfect pebble shape…

If I simply collected pebbles from the beach, they were already half way done. And, far better, I could personally select the stones that I would tumble, virtually guaranteeing that I would like the finished result. Happy days! I spent the next hour collecting a bag of stones to take home with me.

I would later find out that, under the Coastal Protection Act 1949, you’re technically not allowed to take pebbles from the beach. Section 18 of the Act states:

it shall be unlawful to excavate or remove any materials … forming part of any portion of the seashore.

What this text means by the word ‘materials’ is later clarified as :

However, the main focus of the Act seems to be on the excavation of beach materials. And fossils must also be included under the banner of ‘other mineral substance’ (and/or stone). Yet the Jurassic Coast Trust actively encourages fossil hunting on the beaches of Lyme Regis and Charmouth in Dorset.

As such, it seems likely to me that collecting a couple of kilograms of pebbles, a couple of times a year, should be tolerated. Even so, I won’t mention the beach in Pembrokeshire, just in case.

I am, however, happy to say that I’ve also collected pebbles from Chesil Beach in Dorset. Chesil Beach is an 18 mile (29 km) stretch of shingle that is up to 15 meters (50 feet) high and 200 meters (660 feet) deep. The one thing that Chesil Beach isn’t short of, is pebbles!

And, most recently, Emma and I collected some pebbles from Porlock Bay, in Somerset. This is another massive shingle beach, that has some green pebbles in the mix. It was also the first time that Emma had tried stone tumbling. Sadly, though, after four weeks in the tumbling machines, the stones came out exactly the same as they went in, only smaller. They simply didn’t hold a polish. I suspect the rock involved is too soft and/or porous…

Either way, I can’t recommend Porlock Bay for stone tumbling.

Going back to Chesil Beach, the pebbles from there are sufficiently hard to be ground into a very smooth finish. Certainly, some of my favourite tumbled stones have come from Chesil Beach.

Which leads me to my present quandary…

Having moved to our new house, we now have a separate garage. In this garage, I finally have a place where I can tumble my stones without them also grinding on Julie’s nerves. Furthermore, it’s exactly a one hour trip to Chesil Beach.

However, I have now tumbled the last of the pebbles that I’d collected over the years. Pebbles which were collected before I learned about the Coastal Protection Act. So if I have been doing something wrong, in collecting those pebbles, I wasn’t aware of it at the time.

But if I choose to go back to Chesil Beach, now, it will be in full awareness of the Coastal Protection Act…

To be honest, if this Act does apply to casual stone tumblers, it seems like petty bureaucracy at its worst. While I completely understand that we must be aware of coastal erosion, and protect against it, there is such a thing as a risk assessment. What is the practical risk to a beach with an estimated 180 billion pebbles, from people like me? Especially given the following:

And it is surely this type of activity that the Coastal Protection Act was designed for…? If 10,000 tonnes constitutes a ‘small amount’, that’s great. 100,000 people like me would take less than that in our entire lifetimes…!

But my problem is that I’m too honest, and I like to stay within the rules. No matter how stupid they might seem to be.

And there are alternatives.

Decorative UK sourced beach pebbles which are ideal for water features and garden borders. Beautiful UK sourced natural stones and the colour changes when they get wet.

So, on the one hand, this is exactly the type of thing that I would be collecting myself and for less than the cost of the fuel I would use in doing so. On the other hand, I wouldn’t be collecting them myself, meaning I would miss the thrill of the hunt.

But, on a third hand(!), 25 kg is far more than I would collect from a beach myself. Which means that I would still be able to hunt through for the ones that I wanted to tumble.

So, I suppose, that’s what I should do. Get a bag from Wickes, I mean it’s got to be worth a try. And, who knows, maybe, in time, my favourite, favourite tumbled stones will have come out of a £9 bag of pebbles from a hardware store.

And, hypothetically speaking, if I ever did collect pebbles from Chesil Beach again… Say, for example, because the Wickes pebbles just don’t cut the mustard… And someone turned up and asked about the source of my favourite tumbled stones… I would be able to point to a half empty bag of Wickes Decorative Beach Pebbles and just shrug…