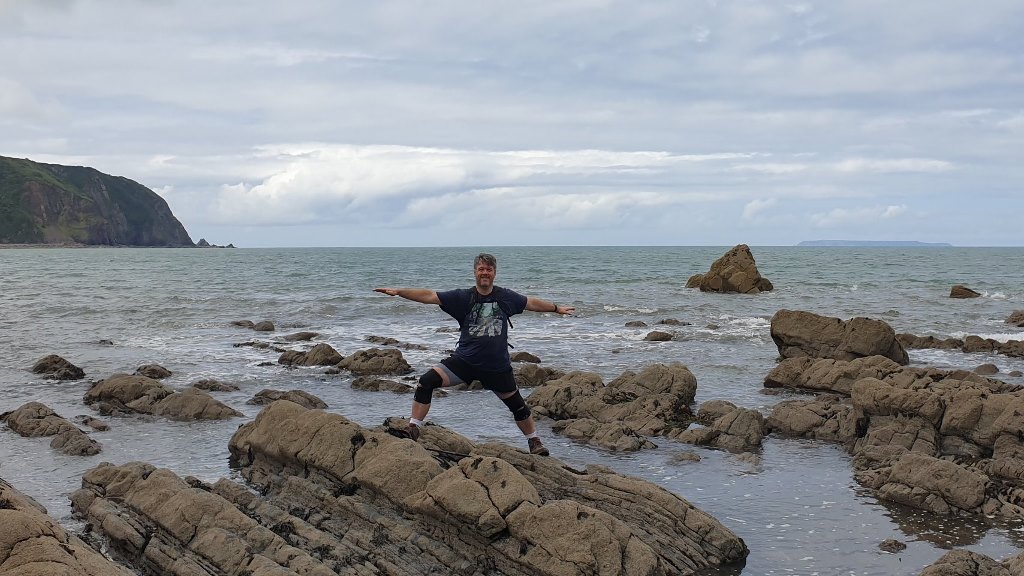 In my July 2020 update, I explained that I was starting antidepressants. And that, as a result, it would be unlikely that I would be able to maintain my posting schedule (I was all too right about that!). I’d had a consultation with my GP, on the 24th July, and was prescribed Sertaline, which I started taking as soon as I got them. I was warned that I might not start feeling the benefits of the Sertraline until deep into August 2020…

Oh, and that there might be some side effects. But that any such side effects would wear off after a couple of weeks.

To be honest, though, the start of August 2020 was awesome. We’d chosen the first week of August to be our Lewis Family Staycation. Although the Coronavirus pandemic meant we weren’t able to go abroad for a holiday, we could certainly act like we had. So, we bought a decent sized pool and filled it up a couple of weeks before the start of the Staycation. You know, to give the Sun a chance to heat up the water. The same Sun that is famously ever-present during the British summer…

We checked the temperature of the water after a couple of warmer days. It was freezing! Thankfully, there was still a couple of days before the start of the Staycation. So we plumbed a pool heater in. That did the trick.

Then, for the Staycation itself, we alternated days at home, with days out and about (fortunately the Coronavirus restrictions allowed this at the time). We also made sure to go in the pool every day. Just like we would during a normal holiday. My point is: it was a nice Staycation.

My more specific point is: I was able to enjoy the Staycation.

Which, presumably, meant that the antidepressants were going to work, right? I mean, I distinctly remember a 36 hour period, during the Staycation, where I felt actual pleasure and happiness. I remember thinking, “If this is the way Sertraline makes me feel, I’ll stay on it for the rest of my life.”

Sadly, that feeling of pleasure and happiness only lasted for those 36 hours. And it never came back. Instead, for the rest of August 2020, I existed in a perpetual state of Sertraline-induced anxiety.

And let me tell you, that’s even less fun than it sounds!

But August 2020 did offer a way to end my relationships with: depression, Sertraline and anxiety…

Because, on Wednesday 19th August 2020, I had a meeting with an oncologist to get the results of my latest scan. The scan itself was an MRI, which I’d had on the 5th August; right in the middle of our Staycation. But that was a small price to pay for the potential peace of mind that it offered.

And I had only been booked in for an MRI, which made a lot of sense, because CT scans of my liver never really show anything. Even when my weight is relatively low.

During the wait for my results, on the 11th August, I got a follow-up call from my GP about the Sertraline. The GP asked how I was getting on, and I told her about the 36 hours of happiness and the feelings of anxiety that had been increasing ever since. She explained that it was still normal to have side effects from the Sertraline, at this stage. I explained about the Scanxiety that I always feel between a scan and hearing the results. We agreed that I should keep taking them, so she gave me another prescription.

Shortly thereafter, and out of the blue, I was told that I had an appointment for a CT Scan on the 20th August. This made no sense because, as I’ve said, every medical professional familiar with my case has said that CT scans just don’t show anything on my liver…

The real issue, though, was that the 20th August (scan date) was definitely later in time than the 19th August (meeting with oncologist). For a while, there, I was clinging to the hope that it was just a belts and braces approach. Maybe an Admin thing. And that the date of my meeting with the oncologist would remain the same.

The inevitable duly happened, and my appointment on the 19th was cancelled. I was given another appointment for the 26th August, just a week later. But a week is a looooong time when you’re in Scanxiety territory. Additionally, the ‘attending clinician’, had changed from someone who I knew was an Oncologist, to someone described as a ‘Specialty Doctor’. In truth, I had, and have, no idea what this means: it just seems like it could be a downgrade…

And nobody wants a downgrade when it comes to the person in charge of the life and death decisions surrounding your cancer treatment!

Anyway, the anxiety became unbearable and, on the 18th of August, I crumbled, and phoned the Colorectal Nurse Specialists at the hospital. I asked whether there was anything they could tell me, based on the results of the MRI scan. And thankfully, there was…

The tumour on my liver had shrunk from 28mm to 22 mm, a reduction that I decided equated to about 25%. Therefore, to my mind, the SABR radiotherapy I’d received in May 2020 had resulted in a 25% reduction in tumour size, as seen three months afterwards.

I was told that this was ‘Great News’.

Sure, the tumour was smaller. But it was still there. And a secondary tumour can still spawn its own little secondary tumours, any time it likes. Presumably, the nuking that my liver tumour had received from the SABR, made the generation of such additional secondary tumours less likely. But, as far as I was concerned, the only news that would be truly great, was the news that, ‘the operation to remove your tumour was a success.’

But, to even start heading in a direction where such an announcement would be possible, I’d have to wait until the 26th…

My latest scan results confirm that the radiotherapy I had in July has shrunk the tumour that was identified in February. Which is good. Even better is that there is nothing else lurking anywhere in my body. All I need now is a date for some surgery and I’m back on track.

The best thing about my phone meeting with the Specialty Doctor, was the news that there were no other tumours. The most annoying thing about the conversation, was that the demand for the CT scan had come from the radiotherapy department in Bristol. Apparently, they needed the CT scan to complete their records… The worst thing about the meeting was that, due to the CT scan-related delay, no decision had been made about the next step in my treatment.

The decision making, for cases such as mine, is done in MultiDisciplinary Team meetings. These MDT meetings bring such departments as: oncology, surgery and diagnostics together. They allow clear, well informed decisions to be made. My case is more complicated than some, because my oncology and bowel surgical teams are based in the hospital in Taunton, who have their MDT meeting on Mondays. Meanwhile my radiotherapy and liver surgical teams are based in a Bristol hospital, which has its MDT meetings on Fridays.

As such, in this instance, I’d have to wait for the results of the CT scan to cycle through Taunton, then Bristol, and back to Taunton again.

I’d have to be patient…

A patient, patient, if you will!

Anyway, back to the situation at hand… After all this was explained to me by the Specialty Doctor, I asked whether my preferences would be considered. She assured me that they would be. So I explained, as clearly as I could, that I really, really wanted some surgery, please. She said, much to my relief, that she’d make sure that my wishes were passed on.

The result of all this meant that, while there was definitely some good news, my reality was that it was back to the waiting. Waiting to see if, and when, I could have some surgery.

An answer that I would not receive until September 2020…

Making the intervening time one that would be chock full of anxiety.

So, let’s talk about what anxiety feels like, to me…

The most prominent thing is the breathlessness.

I’d be going about my day and I’d notice that I was, more or less, panting. And, having noticed this shortness of breath, it immediately became worse. I needed to suck in some deep breaths, just to get back control of my breathing.

The longer I went on with my anxiety, the more common this became. It wasn’t long before my wife spotted me leaning against the kitchen worktop, dragging in as much air as I could. I hadn’t even noticed she was there!

And then, after my wife saw it happen once, she pointed out that it was happening at other times. We’d be watching TV, of an evening, and I’d absentmindedly take a couple of really deep breaths. And, as soon as I knew that my wife was watching out for it, I started noticing how often I was having to take these deep breaths. It was a lot!

What didn’t help, in the earlier parts of August 2020, was my concern that this shortness of breath could be because I had another lung tumour. Thankfully, the meeting on the 26th was able to put that particular concern to bed.

And the reason that I felt that I needed to take these deep breaths? To avoid what I thought could have been the start of hyperventilation. Now, to be clear, I’ve never hyperventilated, but I could certainly imagine how easy it would be to get there, from the breathlessness I was experiencing.

My other most notable symptom of anxiety, was the… Actually, I’m struggling to describe this, so bear with me:

The tension, or maybe compression, that clamped down on my heart and stomach. Actually, thinking about it, this is the same sort of sensation that I was experiencing on my lungs. The thing that was making me pant in the first place…

Anyway, the thing about this tightness around my midsection, was that, at times, it left me cringing. Crouched down, bent forward and clutching my arms to my chest as if I were freezing cold.

And on the occasions that one of these cringing episodes coincided with being breathless, I really felt uncomfortable and uneasy. And, again, while I’ve never experienced a Panic Attack, I do feel like I’ve come close to knocking on the door of a couple!

So, there you have it; the way I experience anxiety. And feeling like that, is how I spent the majority of August 2020.

Anxiety can really mess up your life. If you recognise these symptoms in yourself, it might be worth discussing them with your doctor. There are tried and tested ways of dealing with anxiety. And anxiety is definitely worth getting rid of, if you can.