How to Make Alcohol at Home 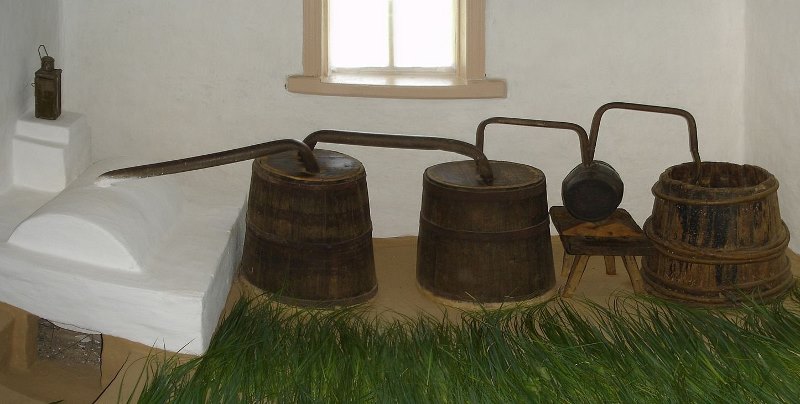 Given the abundance of apple trees at our new house, I’d say it’s inevitable that I’ll try my hand at making cider, at some point. A plan that ties in with the ideas I discussed about food preservation last autumn. And in that food preservation post, I said that I wanted to look into how you actually make alcohol at home. So I have…

And so, it seems, has everyone else!

When I was writing about food preservation, in September 2019, the Coronavirus Pandemic didn’t exist. But, it does now! And it seems that there is a sudden fascination in home brewing. I know this because I’ve done some preliminary research into the kit you might need to make alcohol at home. And it’s largely sold out. On numerous sites, the starter kits are all gone…

Everyone, it seems, currently wants to make alcohol at home. Well, not alcohol, per se, but certainly some form of alcoholic beverage. And that’s something that I’ve noticed about this crisis. Something that the writer in me finds fascinating; we all tend to think alike.

Forget ‘herd immunity’, we seem to have a ‘herd mentality’!

Because, when there appears to be a toilet paper shortage, we all overbuy toilet paper. Or, as there might be a shortage of bread, we all buy bread flour. The same is true of pasta and pasta flour. When we’re told to stay indoors unless exercising, we all head off to the nearest mountain.

It’s a real indication of how much we think alike. Of how, when we’re struck by inspiration, the sheer number of other people who would be struck by exactly the same ‘inspiration’, given the same circumstances. It demonstrates just how rare an original idea really is…

So, how do you make alcohol at home?

All you do is dump a load of sugar into a big tub of water, and chuck in some yeast.

Seriously, the principle is genuinely that easy. In brewing circles, this process is what’s known as a sugar wash. Please be aware that a sugar wash is a very, very different thing to a sugar wax…!

Of course, when you factor in the practicalities, brewing a sugar wash gets significantly more difficult, very quickly indeed!

For a start, fermentation, the conversion of sugar to alcohol, is an anaerobic process. So, you need to keep the oxygen out of your sugar and yeast mixture while it’s brewing. So you need to slap a lid on your tub.

Except that you now have a much bigger problem instead!

Fermentation produces a lot of carbon dioxide. A lot! And you’ve just trapped it all in the tub by putting that lid on it. Well, something’s got to give… You might be able to work out exactly what it was that gave, when you’re tidying up after the explosion.

Seriously, don’t ferment anything in a closed system. You need to have an airlock:

And, suddenly, it becomes clear: you can’t make alcohol at home without, at least, some specialised equipment. And, of course, the associated expense.

I have to admit, I was more than a little disappointed when I realised this. How many films have you seen, set in prisons and the like, where someone is sneakily making alcohol. Usually using bits and pieces they’ve salvaged and then cobbled together to make a still. They’re making alcohol for free…

Sure, someone involved will have infinitely more technical and practical know-how than I do. And, admittedly, the resulting ‘drink’ will probably make you go mad. Or blind. Or both…

But, even so; booooooo!

So, the question then becomes, what is the minimum amount of kit that I need to make alcohol at home? And, as an important side note, what would happen to me if I drank it?

Okay, so the good thing is that you can get away with as little equipment as:

And once you have this equipment, you can reuse it until it needs replacing. So, after the initial outlay, the more batches you make, the more cost effective that capital expenditure becomes.

To go into the tub, you will need your ingredients. And, because I’m only trying to make alcohol, I won’t be adding anything to impart a flavour. That can always be added later, if desired. And I can’t imagine that it won’t be desired, unless, like me, you’re primarily interested in using the alcohol as a preservative. Anyway, what you need is:

In theory you can use any yeast.

But, in reality, you shouldn’t try and use a wild yeast, like you would if you’re making a sourdough starter (which seems to be another thing that has become Coronavirus Chic). This is because the properties of a wild yeast will not be known, meaning that fermentation might continue after you’ve bottled your alcohol. This is certainly something else you want to avoid, from the explosion point of view.

In terms of yeast, anything you would use in baking, will work in brewing. These yeasts all tend to be Saccharomyces cerevisiae (easy for you to say!). That said, brewer’s beasts tend to offer faster fermentation times and higher alcohol tolerance. To get the best results, certainly if said ‘best’ results involve the highest possible alcohol percentages, you’re going to need to pay the extra for the brewers’ beast.

In terms of alcohol percentages, don’t get your hopes up. While some manufacturers will suggest their yeast can do better, you’re unlikely to get above 12-15%, if you make alcohol at home. Still, it’s a start…

Oh, how I amuse myself.

And, on a related note note, you’ll get better results if you use distilled water.

You’ll also help ensure that you get the best possible results, if you sterilise all of your equipment before every use, with something like Sodium metabisulfite.

And you’ll definitely get better results if you get rid of the yeast suspension, at the end of fermentation, by adding a clearing agent such as Isinglass. Now, while ‘Isinglass’ sounds like the coolest thing in the world, maybe somewhere awesome to visit in Middle-earth, it’s actually made from the dried swim bladders of fish. Soooooo, there’s that…

Anyway, other clearing agents are available.

But no cleaning agent can get rid of absolutely all the suspended yeast, so you might want to consider other ways to improve the purity. After all, you’ve come this far.

Which means, what was a simple list of ingredients, becomes:

The actual fermentation process takes a couple of weeks in a warm, dark room. You’ll also need to allow a couple of days for the clearing agent to do it’s thing.

And, at the end of all that, you have a clear liquid that is about 12-15% alcohol by volume (ABV), that you made at home. About the same as a wine…

For a good guide on all this, I recommend this WikiHow Page.

For a good YouTube video, you could do worse than this one.

On the up side of the news, this stuff is perfectly safe to drink.

On the down side, it’s not going to taste that nice. You can, however, do something about that…

Which is all well and good, but 12-15% isn’t strong enough for food preservation.

By distillation, of course.

Except, you can’t do that… It’s illegal in most countries!

In the UK, for example, you’re not allowed to manufacture spirits without a distiller’s license. Even if it’s for your own consumption.

That said, there certainly seem to be any number of sites that will sell you something like an Air Still. I’m not sure how that works. Not the Air Still, which seems relatively straightforward. And, also, safer than various of the other options. Distilling alcohol seems to involve flames and highly flammable gases. Something like that, done in a confined space, just brings us back to the explosion issue again. Which is probably why you need a license to do it…

And, if the Air Still avoids all that, it might be why it’s tolerated. If, indeed, it is tolerated! If not, I don’t understand why it’s available for purchase…

Not that I’m interested in getting one. Not only would using it be illegal, but getting one isn’t cheap.

Fractional freezing, known incorrectly as freeze distillation, is not a distillation technique. It is, rather, an enriching, or concentrating, technique. As such, you do not need a distiller’s license. What you do need to be aware of is that everything in the liquid gets concentrated. This is why things like Applejack are famous for the hangovers they create. The Applejack hangover is so bad, it even has a name: Apple Palsy. Class!

Which is why I mentioned so many ways to clarify and purify your sugar wash. If you’re going to try some ice distillation, you’re going to want the sugar wash to be as sediment and containment free as possible.

Fractional freezing works by taking your 12-15% home made alcohol and putting it in the freezer in, for example, a plastic bottle. Then you leave it in until the whole thing appears to be frozen. I say, ‘appears’ to be frozen because, while water has a freezing point of 0ºC, alcohol (ethonal) has a freezing point of -114ºC. Now, I don’t know how good your freezer is, by mine doesn’t get to -100ºC. I think mine will do -20 to -25ºC.

This means that the alcohol isn’t actually frozen, it’s just trapped in the water ice. So, if you take the cap off and put your bottle over a jug, you can collect the runoff. The percentage of the alcohol content will depend on how much of the run off you collect. The first few drops are going to be around 90% alcohol. If you let it all melt out, it’ll be back to 12-15% again. Whatever you started with.

The more volume of alcohol you let out of the bottle, the greater the amount of water it brings with it. This is because the water ice is melting all the time. And the longer you allow the runoff to collect, the more the water ice has a chance to melt.

To get 40% alcohol, it seems you collect the equivalent of one eighth of the starting amount. So, if you froze a 1 litre bottle and collect 125ml, that should be about 40% ABV. If you start with a two litre bottle, it’ll be the first 250ml…

I don’t really see how the maths works out on this, and I’ve been basing it on the one specifically related YouTube video that I could find. Mind you, he was able to set the runoff he collected on fire, which seems a pretty good indication that it’s at a good 40%, minimum.

I think the only way for me to be sure is to buy an alcohol hydrometer (cunningly called a Alcoholometer) and try it for myself. Except I’m not going to. At least, not right now.

I mean, none of my family really drink that much. And I won’t have anything I need to preserve until the autumn. Besides, so much of the stuff that I’d want is out of stock. On the Brew Store site, for example, they’re sold out of the high alcohol tolerance yeasts. The medium and low tolerance stuff is still in stock, but that’s not going to work for my little experiment.

It also doesn’t seem to be the best time to be getting unnecessary things sent to my home. Or spending money frivolously. After all, who knows how long the Coronavirus Pandemic is going to be with us?

So, while I do think it’s a nice idea to make alcohol at home. And I’m pretty sure that I’ll give it a go before the year’s out. Now is not the right time. If anyone else freeze distills a homemade sugar wash, please do let me know how it went.