The Best Ways to Preserve Food at Home 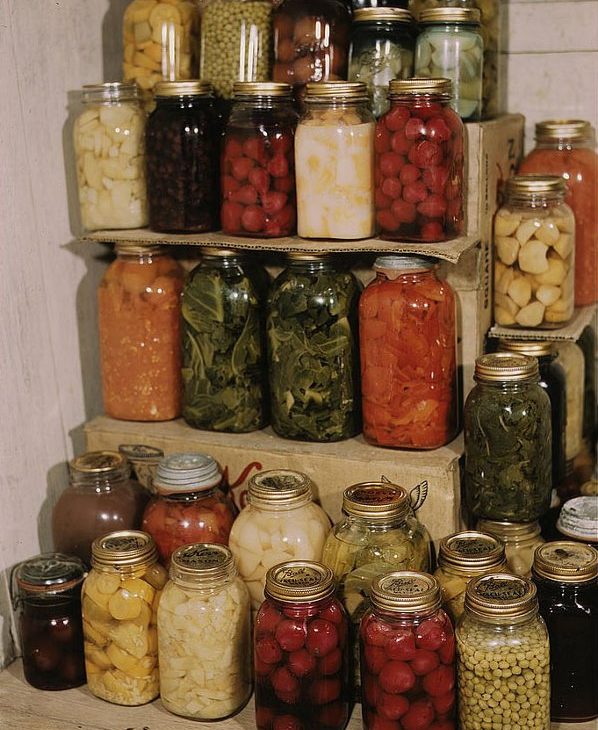 We’re in the process of moving house. I won’t go into all the rigmarole involved in the actual move, in this post, I’ll do that later. What I want to talk about here is the major thing that’s keeping me awake at nights, and that’s how we’re going to preserve the food we might grow in this new home.

No, I don’t understand the way my mind works, either. Just be grateful that you don’t have to live with it!

The thing is that the house that we’re moving to has some land with it. Nothing huge, but certainly more than we’re used to. And, theoretically, also enough to be used as a smallholding, if we so chose. Even if we don’t so choose, there are at least five mature apple trees on the grounds and, potentially, other fruit bearing trees and plants. And, because I don’t like the idea of wasting food, I’m going to want to make use of these apples.

Equally, though, I know that we, as a family of four, can’t consume the entire crop of three eating apple trees and two cooking apple trees. And, sure, we can probably give a lot of them away, but I don’t think we know enough people to move them all. I could also leave them in buckets by the road side for passers by to collect, but I don’t know how that would work…

For a start, what’s to stop people swiping the damn buckets? And then there’s the matter of making a sign!

It all sounds fraught with difficulties. Besides, if I’m going to all the trouble of collecting and moving this fruit, I think I’d prefer to get the reward. Which led me to think about how to preserve apples, and that’s were I got stumped. Apples seem to be a food that’s difficult to preserve.

And all this got me to thinking about the rest of the place. I mean there’s a vegetable garden with a poly tunnel and a couple of greenhouses. It would seem a shame to not make use of these. After all, there are plenty of vegetables that I regularly use in my cooking and there’s no real reason that I couldn’t grow them myself. Except that it might be genuinely cheaper to just buy them from the supermarket, as and when I need them.

Because, the problem with crops of vegetables is that they tend to all arrive at around the same time. It’s either feast of famine. Unless you can preserve the vegetables, and other food, that you grow.

Which brings me back to the question of how best to preserve the foods I grow.

As I understand it; there are five ways to preserve food:

I know there are other ways to keep food, like freezing. But I don’t have a freezer big enough to take five tree’s worth of apples. Besides, I don’t even think that apples freeze that well. Seriously, apples are a nightmare!

Given that I live in Somerset, the most obvious answer is always going to be to make cider. And, to some extent, I have no problem with this; providing I’m able to retain the nutritional value of the apples. The object of the exercise, here, is to preserve the food, not to use the food to make alcohol.

At least, that’s the object of this post. I will look at making alcohol in another post, because that’s another thing that’s driving me nuts. How do you actually make alcohol?!

But, going back to the apples; if I’m looking to preserve as much of the nutritional value of the apples as possible, in a cider form, I presume that would mean some form of Scrumpy? Something that’s as close to apple juice as possible, but with just enough alcohol to preserve it…?

Right, that’s enough about apples for the time being.

I need to understand more about the ways to preserve food, which might actually be useful to me.

It’s time to free my mind!

Right then, it seems that there’s a lot more to food preservation than I thought. To be fair, this comes as no surprise. And I’m glad, because I do enjoy learning new things.

The five ways to preserve food that I’ve listed above are all variations on the technique of storing food in an antimicrobial liquid. This technique is shared across two of the methods of food preservation used by the home chef and smallholder:

So, on the whole, I was on the right track but there are sooooo many other options. The Wikipedia page on Food Preservation lists the following traditional techniques to preserve food:

Which means that I was totally wrong about the cider idea. That would be classed as fermentation, and is just about making alcohol. It’s nothing to do with retaining the nutritional value of the fruit.

On which note, I was also totally wrong about preserving apples. The briefest search took me to a page entitled, 12 Ways to Preserve Apples. To be fair, I have no idea whether the site is any good, but it certainly looks interesting. And that’s enough to make me feel excited about checking out some of the recipes linked to the page.

But what I might be right about, is the cost involved.

While it’s absolutely possible for me to grow and preserve my own food, is it possible to make it cost effective?

For a long time, now, I’ve been waiting for the opportunity to plant a whole bunch of fruit trees and then harvest them each year. I also love the idea of becoming as close to self sufficient as possible, in terms of fruit and veg. These things are really exciting to me. But, how much will it cost to make it happen?

And, equally importantly, how much time would I have to invest to make it work?

Because I’m not sure how much time I have to spare to devote to what might turn out to be something that isn’t even cost effective. And, while I understand that the various growing seasons means that there will be busy times of the year and relatively quite times. But, surely, in order to come close to self sustainability, you’re going to need to try and ensure that there’s always something to be harvested? And this means that you’re always going to be at least somewhat busy.

So, whereas, currently, I spend 15 minutes a week doing an online shop on a supermarket website. And then another 15 minutes packing the food away, once it’s been delivered. If I was to grow and preserve my own food, I think I’d have to allow an average of 15 hours a week. And that’s a big commitment, given that the current system works just fine.

That’s also a lot of time for someone who is supposed to be settling down to write a novel!

Maybe a look at the costs involved will help.

Actually, it’s not that bad. Providing you preserve a lot of food and you do it for a lot of years.

One of the pages I looked at compared the costs of Dehydrating, Freezing and Canning. The comparison was of the costs to preserve 500lb of food a year, with the outlay costs spread over a 20 year period. Which is almost certainly wildly optimistic. As such, I’ll double the cost estimates to reflect a 10 year life span for the equipment involved. The results are:

Most of these costs are associated with the initial outlay of the equipment involved. The freezer, for freezing, The dehydrator, for the dehydration. And a pressure canner and water-bath canner, for the canning. In terms of the canning, this is the standard set-up for the system in the US. In the UK things are done differently. Potentially, I’d only need one of the canners, reducing the costs substantially. I’ll look into the exact details, if I decide to head down that route.

Canning, incidentally, is a misleading name. These days it’s all done in Kilner (Mason) jars, as opposed to actual cans.

The page I’m getting all this from is on an American site, as such the prices of the equipment involved will be relatively less than, say, the UK. Even so, I must say, this is seeming very tempting again.

Because there’s more to this than just the cost in terms of time and money. There’s the satisfaction, The joy of producing and preserving your own food. And then living on it. Using it to make meals and feed my family.

After all, I make a Christmas cake every year. And, by the time I buy all the ingredients involved, it usually comes to well over £30. I could easily buy a supermarket Christmas cake for half of that amount. Fine, the supermarket wouldn’t be quite as big, or quite as nice, or anywhere near as fresh, but it’d do the job.

But then I don’t bake the Christmas cake because it’s the cost effective option. I do it because I like doing it. I like the challenge and I like the feeling I get watching people tucking in and enjoying it. Because, I made that…

I can easily imagine that I’d feel a similar way if I were to preserve my own food.

But, that still leaves me with the quandary of what food to preserve, and the best way to do it. Because I don’t imagine I can do all of it. Julie, for example, might think there are better things I can be doing with my time and our money…

I must confess, though, I’m sorely tempted by the idea of getting a dehydrator and going to work on all those apples…

There is, however, one more slight hitch to all this…

The costings are based on preserving 500lb of produce a year. This would require the consumption of 10lb of preserved fruit and veg a week, between my family of four. Now, while it’s possible to assume that we do actually eat 1.5lb of fruit and veg a day, between us, it’s currently all fresh. Well, as fresh as things can be from a supermarket.

But surely the idea here is to preserve the surplus food. You eat as much as you can, fresh from the field, or tree, and then preserve the rest.

So, assuming that half of the things we grow, we eat fresh and the other half we preserve. That would mean that we’d be eating 1,000lb of fruit and veg a year, between the four of us. And, okay, that just means three quarters of a pound of fruit and veg a day, for each of us. Which is only 340g a day. But, the thing is, you see; two of our number are teenage girls!

I can only hide so much veg in their food before they start to cotton on!

But, all that said, I’m willing to give it a go.

I made a good batch of raspberry jam, a couple of years ago, so I’ll be happy to try preserving various fruits in this manner. I think, technically, this comes under the ‘sugaring’ banner.

I’m also fairly interested in the idea of fermentation. With all those apples, it seems a shame not to try and make cider. And, if it all goes wrong, at least I might get some apple cider vinegar out of it.

And, because I love the word piccalilli, I’m going to have to try and make some of that, which means I’ll be trying pickling. At least, to some extent.

Finally, I suspect that I’m going to find dehydration irresistible. How can I not be enthralled with the idea of turning fruit into something crispy? It’s got to be done…

Yep: Julie’s going to kill me!

4 thoughts on “The Best Ways to Preserve Food at Home”