Who Actually Won the Tokyo Olympics?! 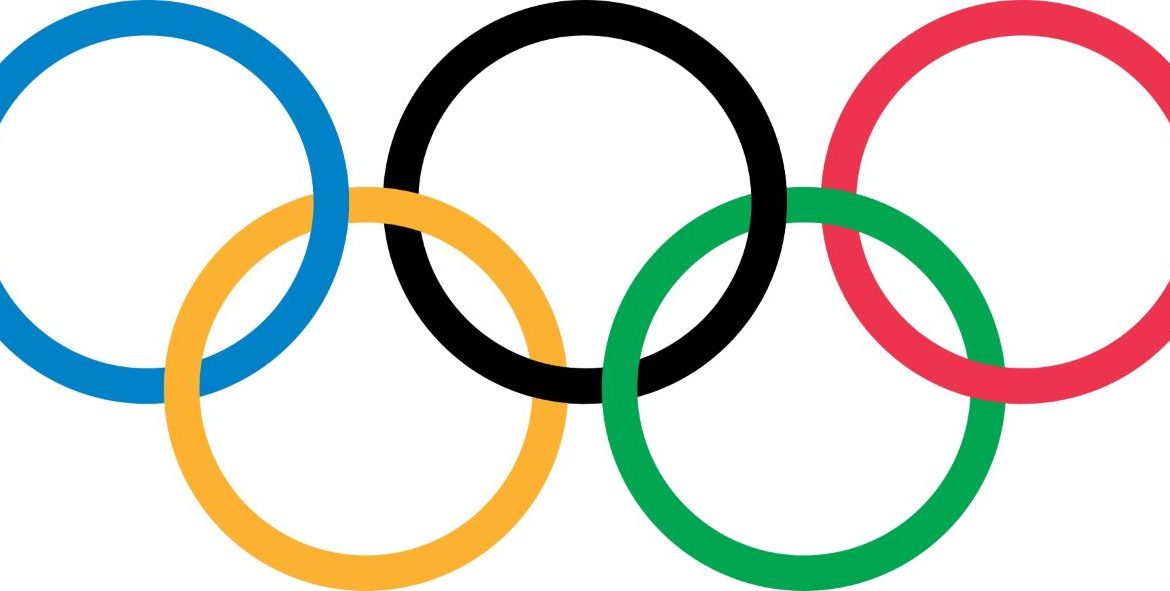 With the Tokyo 2020 Olympics finished, and the Paralympics getting under way, I thought I’d take a look at who actually won. The main reason for this is that I saw, on Social Media, that some European political type had had the audacity to point out that, had the European Union competed as a block, the EU would have finished on top of the table. The subtext being pushed was that, for some European politicians, it was the EU that won the Olympics. Thereafter was a, “how dare they say such things…?!” attitude, which, if I’m being honest, doesn’t seem to be in the spirit of the Olympics at all.

After all, to my mind, so many people won the Olympics that it’s going to be hard to list them all.

There’s me, for a start, because I thought the Olympics was amazing. I loved it. I mean, I’m not entirely convinced that it was in Japan’s best interest to hold the event. And I’m fairly sure that there’s going to be a spike in COVID cases as a result. But that was Japan’s decision to make, and they made it in the full knowledge of what might happen to their COVID cases. And, given that Japan decided to run the Olympics, the best thing I felt I could do was watch at least some of it. Which I did. And, as a spectator, I felt uplifted by the event. And if that’s not winning, I don’t know what is.

To which end, I think that everyone who watched and enjoyed the Olympics, won to at least some extent.

And the people who organised and ran the event are winners to a person. To successfully manage a full-scale Olympics during such a time is nothing short of magnificent. Everyone involved, from the head of the organising committee to the volunteers on the day, should be utterly proud of what they achieved.

Which brings me to the athletes. To represent your country in the Olympics must be a dream come true. Obviously, this particular dream is one that involves endless hours of hard work and commitment…

Now I come to mention it, that sounds an awful lot like a nightmare to me…!

Which goes a long way to explain why I’m not an Olympian. Well, that and my lack of athletic flair. Anyway, the point that I’m trying to make is that anyone who competed at the Olympics is a winner in my book.

Naturally, though, not all winners are created equally. Which is why medals are awarded in the first place. To reward that absolute cream of the crop. And once you start awarding medals, you can start comparing people and countries… Because you get medal tables.

The full table runs 93 nations deep, so I couldn’t display the whole thing. But, as it turned out, I could export it into Excel and start crunching the numbers.

I do enjoy a good number crunch…

So, I looked at the claim that the EU would have won the Olympics, had the associated 27 countries entered under the one flag. And, you know what? The claim is absolutely correct.

So, congratulations to the EU, which would have won the Olympics by an absolute mile.

And, there you have it. Case closed. The EU is the winner…

Except, “Wait!”, I hear you cry. “Why stop at the EU? How might other organisations have fared if they were taken as a collective?”

Well, I’m glad you asked because I already had the spreadsheet set up and it seemed a waste to not play with it some more.

Now, when it comes to other organisations the same as the EU, well: there aren’t any. Something that had the potential to trip my plans at the first hurdle. That’s not to say that there aren’t other international trade bodies, there are plenty. Examples include:

And what all these other bodies share is that they’re different from the EU, which is the World’s only Supranational Union. No, I don’t really know what that is either. All I know is that there is no equivalent body to the EU elsewhere in the World, making like-for-like comparisons impossible. Which is fine because, and without bothering to check, I’m just going to say that the EU won more medals than any of these other organisations.

Besides, the UK, having left the EU, is also not a member of any of these other bodies. And, admittedly somewhat selfishly, I’m more interested in looking at things that relate to the UK. Or, in the language of the Olympics, ‘Great Britain’. Those in Northern Ireland have the choice of who to compete for out of Team GB and Team Ireland. As such, my representative at the Olympics is Great Britain instead of the United Kingdom.

For the purposes of the rest of this post, however, I’m going to use ‘UK’ and ‘GB’ interchangeably, just to make life easier. You’ll see why, soon.

It should come as no surprise that Europe tops this particular list. After all the EU only has 27 countries compared to the 44 in the whole of Europe. And adding Great Britain’s fourth place haul to the mix certainly wasn’t going to hurt.

But geography isn’t really the same as organisations. After all, a country can’t really choose the continent that it’s a part of but it can choose to join and leave organisations.

So, let’s consider the organisations that Britain is a part of…

The obvious first choice, and the one that’s superficially most like the EU, would be the Commonwealth. Or, more accurately, The Commonwealth of Nations. Now, admittedly, this is more a political association than a trade association, but it does have 54 member states compared to the EU’s 27. So, did the Commonwealth win more medals than the EU?

Don’t get me wrong, the Commonwealth comes in a strong second and knocks the Netherlands off the bottom of the Top 10 table. Just as the addition of the EU total removed France from the list. Which means that the Top 10 medal winner table now looks like this: 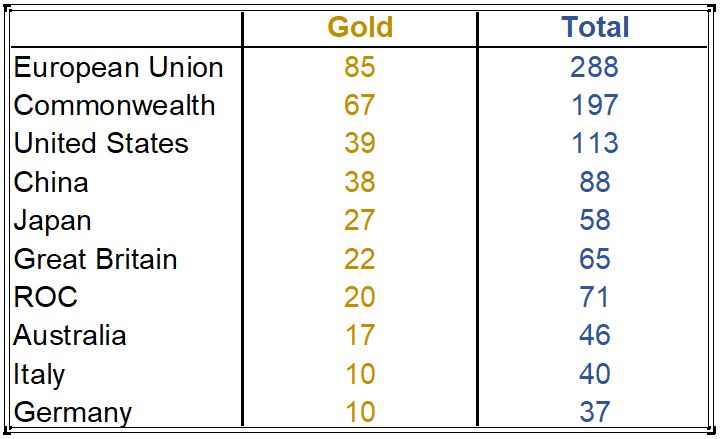 So far, so interesting.

The EU certainly is a powerhouse when it comes to the number of medals won at the Tokyo Olympics.

In all honesty, and before I started crunching the numbers, I had assumed that the Commonwealth would have outperformed the EU. But that’s hardly the first time I’ve been wrong. And I’m very confident that it won’t be the last.

Of course, Great Britain is a member of a number of other organisations as well as the Commonwealth. And when I checked these, I was genuinely shocked by some of the numbers I found.

Rather than go through all of this four more times, I’ll list the organisations in question and then add them all to the table at the same time. I’ll go from the biggest to the smallest.

Boy, is there a lot of overlap in those lists!

Anyway, let’s add their totals to the table and see what we get: 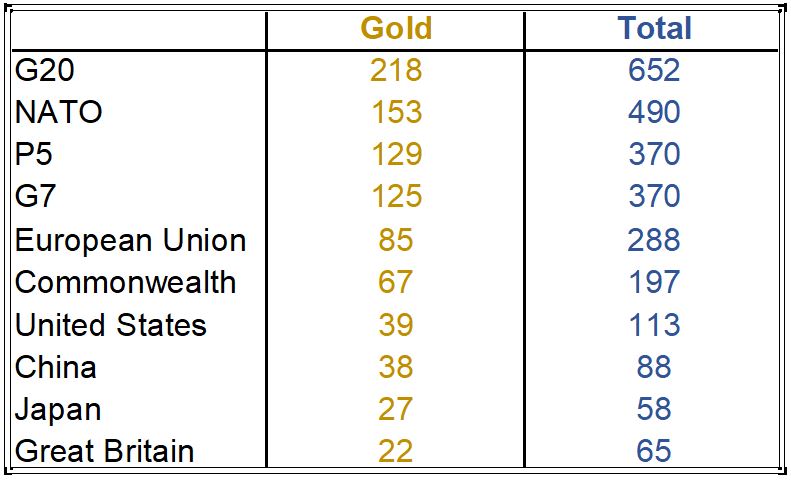 And suddenly the EU is relegated to mid-table obscurity with the Commonwealth of Nations.

Of the four new additions, it should come as no surprise that the G20 outperformed the G7. After all, the G20 is the G7 with 12 additional countries (plus the EU).

I admit that I was taken aback that the seven countries of the G7 outperformed the 27 countries of the EU. But what I find absolutely flabbergasting is that just the five nations that make up the P5 finish higher on the table than both of them.

From here, it would be all too tempting to get drawn into the medals by GDP and/or the medals by population. But I’m not going to do that. As I’ve mentioned in other places at other times, there is a very strong correlation between the amount of money a country has and the number of medals they win. I’ve also already talked about inequality in another post. And when you take any of these things into account, the medal table changes enormously.

But the problem with using these metrics for analysis is that it gets very heavy on the maths and tends towards negativity.

And while I’m perfectly willing to embrace negativity when the need arises, I want this post to stick to being celebratory.

Which, hopefully, brings me full circle…

You can’t really see who won the Olympics from a medals table, because there are endless ways to collate and interpret such tables. Sure, if you want to, you can show that the EU ‘won’ the Tokyo Olympics. But, if you apply the right filters, you can generate an almost limitless number of tables, each with a different result. Is this really what we should be doing?!

No, you need to look at the bigger picture…

Okay, “need” is a strong word, and you don’t have to do anything!

But I certainly want to look at the bigger picture.

Because I think that the World is a better place because the Olympics took place. A feel that a lot of people were able to draw inspiration and feel uplifted from the spectacle and achievement of it all. Something that wouldn’t have happened had the Olympics not taken place.

Therefore, and unbelievably cheesily, my conclusion is that we all won the Olympics.